About Broome and the Kimberley

Surrounded by the azure waters of the Indian Ocean and a good 2,000 kilometres from the nearest capital city, Broome in Western Australia is isolation at its finest.

But don’t let that deter you.

Cable Beach attracts tourists in the dry season with its family-friendly resorts and promise of camels, surf and amazing sunsets.

Meanwhile, the town itself has a lot brimming under the surface including a fascinating history of pearl trading and a melting pot of cultures.

Broome also serves as the gateway to the Kimberley region.

Three times larger than England with a population of less than 40,000, this ancient landscape covers hundreds of thousands of square kilometres and is the ‘real’ Australian outback.

Often touted as Australia’s final frontier, the northwestern corner of the country is a land of remote and spectacular scenery spread across mind-boggling distances.

With a small population, a severe climate and sparse towns, a family trip here is the epitome of an adventure holiday. Little ones will never forget seeing the palm-fringed gorges, spinifex-dotted deserts and magical waterfalls with their own eyes.

Broome and the Kimberley facts

Perhaps Western Australia’s most famous landmark, Cable Beach’s white sand beach, brilliant sunsets, turquoise waters and trademark camels are the picture-perfect postcard. This is the one thing you cannot miss on your family visit to the region; little ones will simply adore taking in the Indian Ocean sunset from the back of a camel. Red Sun Camels has the longest and most photogenic camel trails on offer, so book ahead to enjoy the ride.

Remember that Cable Beach is just as beautiful in the mornings as it is at sunset, not to mention the smaller crowds, so be sure to stop by for a relaxed dip with the kids in the early hours for an entirely different experience.

A series of tiered waterfalls hidden within central Kimberley, Mitchell Falls are at their most spectacular in the early dry season. At the top of the falls, find a carved waterhole and spend the day soaking and splashing about. Or if you’d prefer a bird’s-eye view, the bush pilots love landing near the top of the falls – an experience the kids won’t forget any time soon!

These tiger-striped formations resembling giant beehives rise from an otherwise flat landscape and soar toward the skies. They are part of the 360-million-year-old Bungle Bungle Range in the World Heritage Purnululu National Park. This incredible landscape was only discovered by Europeans in the 1980s and can be experienced by air or on foot.

Mother Nature puts on quite a show at the beautiful and bizarre Horizontal Falls, where tonnes of water squeeze through a gap in twin mountain ranges. The tropical tides are some of the biggest in the world, making a jet boat ride through the churning waters a real thrill. Alternatively, you can view the phenomenon from above on a scenic helicopter ride.

Best time to go to Broome

Best time to go to Broome

Broome’s climate doesn’t feature summer and winter but is instead defined by dry and wet seasons.

Wet season starts around October/November with hot days, isolated thunderstorms and occasional torrential downpours. Between the months of January and March there is monsoonal activity and a possibility of floods.

There are a few different visas available for travelling to Australia. You can find out more information about which might be best for you here.

To cover plenty of ground and make the most of your holiday, the best option is to hire a car. Many of the attractions around Broome are not easily accessible by public transport, if at all, and it is a destination best experienced with freedom and flexibility. Europcar, Hertz and Avis all have rental desks at the airport.

There is also a local bus service called Broome Explorer Bus which runs services seven days per week, year round, with bus stops near all major accommodations through to Town Beach, Chinatown, Boulevard Shops and Cable Beach. A great option if you don’t plan on exploring beyond the outskirts of town.

Barramundi and steak are a staple across Kimberley menus. Broome, Derby and Kununurra offer an array of great dining options, but options outside of these towns can be limited. If leaving town centres, it’s best to stock up at the supermarket and enjoy a picnic lunch or dinner.

If staying in Broome, there’s a number of local favourites to try out. The Aarli is always popular for its outdoor dining and tapas share plates, while Runaway Bar and Restaurant in the heart of town is the place to go for an extensive seafood menu. For the best wood-fire pizza in town and a quirky collection of plastic chairs sitting in the red dirt, make sure to stop by The Mango Place.

Wander around the shops in Chinatown for some funky souvenirs or attend the Courthouse Markets, which in the dry season hosts up to 115 creative stalls full of local arts, crafts, music, hawker food and bohemian wares.

Broome is a very warm place and you will most likely be doing a few outdoor activities during your visit so be sure to pack thongs, hats, singlets, comfortable walking shoes and swimmers.

In general, cultural customs are pretty laid back in Australia and there are no strict guidelines on clothing.

Australia is renowned for its laid-back, egalitarian culture. By and large, friendliness is equated with good manners. Smile, say ‘please’ and ‘thank you’ and locals will usually be happy.

If you’re visiting Indigenous cultures, it is best to check the individual customs of the region as Australia’s many cultures can vary greatly.

No special immunisations or vaccinations are required to visit Australia unless you have come from, or have visited, a yellow fever-infected country within six days of your arrival. However, regulations and medical advice can change at short notice, so check with your doctor and the Australian Department of Health before you leave home.

The isolation and ruggedness of this region may be exciting, but it also carries risks. Always carry adequate supplies of water and a first aid kit. In addition, always let someone know where you are planning to go and keep them updated if you are heading into the outback.

There is a risk of bush fires in Australia’s North West, so always follow fire warnings and never leave a campfire unattended.

In the coastal and inland communities during the summer months (usually from December to March) there is a chance of cyclones. Tune in to local television and radio stations for updates.

Box jelly fish are potentially lethal marine stingers found along the Kimberley coast. Although they can be present year round, they are most prevalent from November until April.

At the southern end of Cable Beach you will find Gantheaume Point, a scenic area of red sandstone cliffs covered in the footprints of dinosaurs that once roamed the area. The fossilised footprints are located on flat rocks 20 metres out to sea, so can only be seen at low tide. There are walking trails leading down to the dinosaur footprints.

More than a century old and located in the centre of town, this open-air cinema is as outback as they come. Its weathered tin facade makes for the perfect Instagram snap to break up your feed of beaches and sunsets. Inside, you’ll find deckchairs and old film projectors: great for little film buffs.

As the King George River winds it way north on its way to the Timor Sea, it drops more than 200 metres in elevation. The most dramatic part of this drop is 12 kilometres from the river mouth where the waters part way to flow around a peak of orange sandstone, forming twin waterfalls and cascading more than 80 metres over the cliffs. King George Falls are Western Australia’s highest single-drop falls and even caught the attention of director Baz Luhrmann, who featured them in his film Australia.

Staircase to the Moon

Between March and October each year, when conditions are just right, visitors to the Broome and Kimberley regions are treated to an incredible natural spectacle: the Staircase to the Moon. Best seen at Roebuck Bay, the full moon rising over the exposed mudflats at peak low tide creates an other-worldly optical illusion of stairs reaching to the moon. This may be one for the tripod owners, a normal camera phone just can’t quite capture the magic.

Family friendly accommodation right near the beach
i
SEE ALL OPTIONS 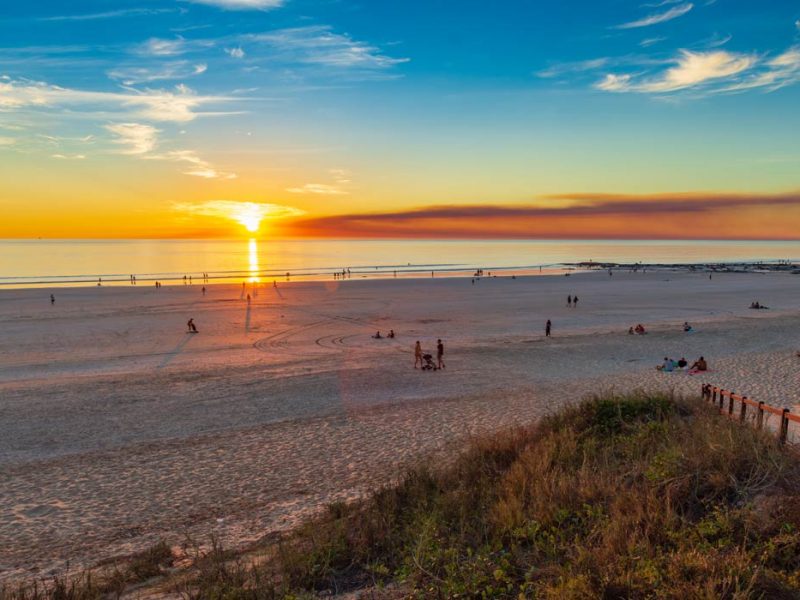 21 things to do in Broome with kids

Families will have a ball in the pealing capital of Australia.