Going solo: Our guide to travelling as a solo parent

Going solo: Our guide to travelling as a solo parent

Travelling alone with kids in tow brings unique challenges, but Aleney de Winter finds the rewards make it more than worth the effort.

Travelling alone with kids in tow brings unique challenges, but Aleney de Winter finds the rewards make it more than worth the effort.

With a red-eye 1am flight home to Sydney, I’m outnumbered. I have one child asleep in my arms, a mound of luggage and a small boy stumbling along beside me like he’s auditioning for the zombie apocalypse. They say it takes a village to raise a child, but I’m flying solo, and this village is a ghost town. I need to single-handedly transport everything and everyone through check-in, customs and on to the plane, a process currently defying physics. But we manage to make it work.

We have to. Travel is my job, and while my partner would love to join us, his work isn’t conducive to traipsing around the globe at short notice. So generally, it’s 100 per cent my responsibility to keep the kids organised, entertained, engaged and alive, while negotiating physical and psychological challenges, tantrums (which are sadly portable) and the unknown. And I manage, just like the thousands of other soloparent travellers hitting the road with their kids.

Carolyn Childs of MyTravelResearch.com has seen a marked increase in solo-parent travel due not only to the changing nature of families but also to the changing nature of work. “There are more single-parent households than ever before,” she says. The 2016 census revealed that, of six million families in Australia, more than 16 per cent lived in one-parent households. But Carolyn points out that parents who travel solo with kids for other reasons are on the rise, too, as coordinating schedules that work for both parents and children’s educational and leisure commitments becomes harder.

What happens when you are not a nuclear family

Father of three Eric Stoen, of popular website travelbabbo.com, believes the travel industry has traditionally been centred around couples and families of four, packaging up travel deals for the standard “nuclear family”.

But that doesn’t mean solo parents can’t be accommodated. Eric says, “A bulk of a hotel’s guests will be in groups of two or four, so rooms are designed for that. And when it comes to marketing, it’s simply easier to market either to couples or to complete families. Anytime you break away from a traditional definition of family, whether it’s with same-sex couples and their kids, or solo parents, it takes a while for marketing to catch up and recognise the value of that demographic.”

One company who isn’t overlooking this significant market is Intrepid Travel. With solo-parent families accounting for almost one-fifth of the family travel market. Dyan Mckie, Intrepid Travel’s Family Product Manager, and a single parent herself, decided to do something about it, launching a series of Solo Parent Family Holidays: “As an industry we need to cater to all types of families and their needs and promote inclusivity.”

“It can be quite overwhelming for a solo parent to organise all of the logistics, answer questions, play tour guide, parent … the list goes on. Solo parents really need to do everything the entire time, which can be exhausting and daunting – especially in an unfamiliar destination – but more importantly, it doesn’t make for much of a relaxing time for them on holiday,” she says.

The Solo Parent Family Holidays departures have been specifically structured for single-parent families only, with unique, culturally immersive itineraries from Vietnam to Morocco, each catering for kids and hosted their kids and see them make new friends while enjoying adult company.

Dyan believes the travel industry could better cater for solo parents by offering more costings on a per-person basis and child pricing, in place of family pricing. She feels it’s important for the industry to use marketing materials that promote inclusivity, and would love to see other companies follow suit and offer more specific solo-parent options.

“As a single mother myself, I feel this had been long overdue and overlooked in the industry and am excited for what is to come for this style of family travel,” she says.

Valuable one on one time

Not all solo travelling parents are single parents. For Eric, it is a choice. While he and his wife travel frequently as a family, Eric takes each of his children on an annual solo trip, a tradition he started when his eldest was four.

“The one-on-one time is very important. At home, more often than not, I’m the rule enforcer, so especially if the kids are fighting and we need to put a stop to it, I come across as the bad guy. I hate that! When I’m travelling with the kids one-on-one, there’s no fighting, and there’s no competition for my attention. It’s just the two of us, somewhere crazy, having adventures and bonding. We come back with memories and inside jokes, and I’m fairly certain in 50 years those are the things the kids are going to remember the most.“

Eric is not afraid to let his children choose any destination they want, as long as it’s not dangerous, and to determine itineraries and activities. “I don’t know that there are challenging environments, per se. After all, there are children everywhere in the world, and since my kids have chosen our destinations and activities, everything we do is something that they are comfortable with.”

This sense of adventure has seen he and his kids fishing for piranhas in Brazil, hiking through Panamanian cloud forest, belly sliding with penguins at the bottom of the world, kayaking among icebergs in Greenland, cheering at the World Cup in Russia, planting rice in Bali, rock climbing in Northern California and skiing in Colorado. “Along with at least 50 more equally fun things,” adds Eric.

But rather than finding flying solo with his kids a challenge, Eric thinks it’s easier: “With two of us, we only need one hotel room and one taxi. It’s easier to get a table in a restaurant with two people instead of five. If we want to sleep in, we sleep in. If we want to go ziplining, we can make that choice without getting everyone’s consensus.”

But Eric admits all travel comes with its challenges and doing everything possible to minimise the risk of travel issues is vital. That’s not to say that there aren’t sometimes problems, “but everything is an adventure, and a chance to power through and make the best of a negative experience.”

After more than two years exploring Asia with her daughter, Evie Farrell of mumpacktravel. com is something of a trailblazer.

Of her amazing journey Evie says, “It was challenging and taught me so much, especially that solo-parent travel is possible, whether it’s for short or long periods, on a resort stay or off the beaten track. But what I do find is that there is often a perception that solo parents wouldn’t be travelling, because people assume that solo parents – particularly solo mums – can’t afford it. In that regard, solo parents are the forgotten demographic because of stereotypical assumptions.”

In reality, every family holiday budget varies widely. And while for some lone parents, a limited budget and single travel supplements can be a burden, just as many single parents are skilled professionals who come from affluent households and want quality resorts and facilities for which they’re willing to pay.

“We stay mostly budget – guesthouses and hostels – and then when I need a break or downtime, or a wine, we stay at a resort, so I can let my guard down, rest and relax and Emmie can spend a few hours in the kids’ club. I’ll have alone time for a little bit, but mostly we will hang out together. Emmie makes so many friends when we are travelling and it’s great when she is playing, and I can watch from the sidelines.”

Evie says that while an extra pair of hands would be occasionally helpful, travelling solo creates opportunities for her daughter to take greater involvement in planning, strategy and on-the-road decisions: “I don’t compare how I travel to how two-parent families travel, because everyone is different, regardless of the number of parents. I’d add another child as a playmate for Emmie before I’d add another adult”.

Evie’s advice is to go for it. “I think full-time travel is amazing, but if that’s not possible, then weekends together exploring are just as fun, bonding and educational. I run solo-parent group trips to make it easier for mums who may find a trip alone with their kids a bit daunting, but that challenge is not specific to solo parents; two-parent families can find travel that’s a little off the beaten track daunting, too.”

While there have certainly been challenges for me and my crew of two on our own travels, the rewards far outweigh them. Our adventures offer us an opportunity to bond like no other, have helped build mutual trust, and taught us all a little about responsibility.

Despite the luggage juggle, we make it to our 1am flight weary but intact, and as we snuggle up, ready to snooze our way home, they and I are already dreaming of our next adventure, together, alone. 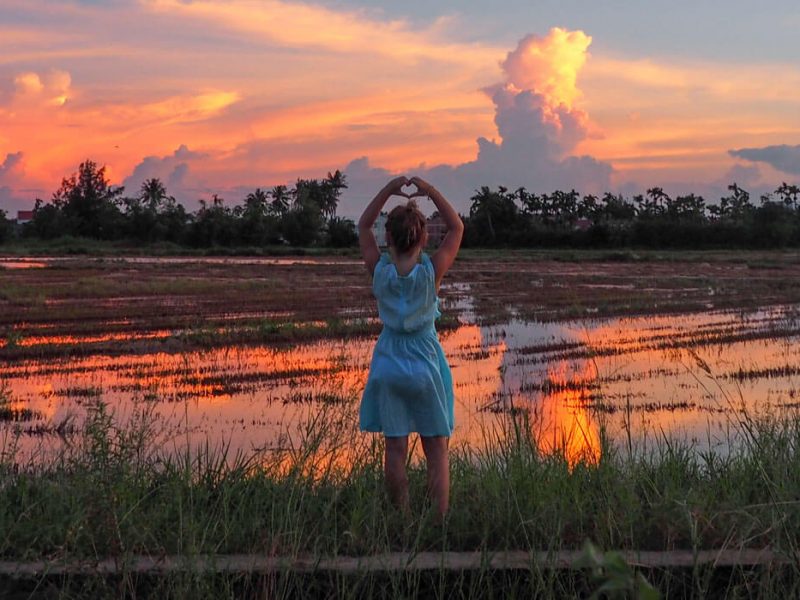 Vietnam with kids: Ho Chi Minh, Hoi An and Danang 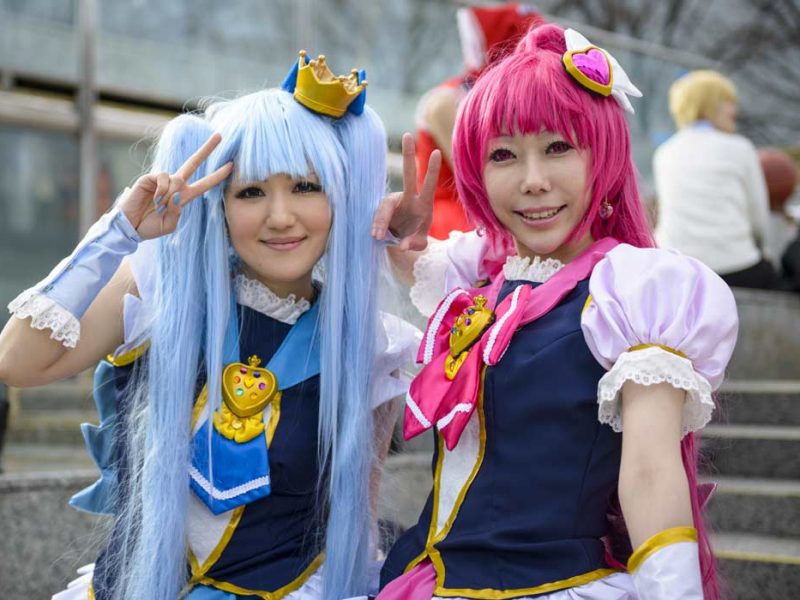 Learn what to do before and during your family holiday to ensure it's a safe, happy getaway for...