Holidays with Kids shares everything you need to know for your air travel with tots in tow aboard Japan Airlines’ business class.

Japan Airlines offers Wi-Fi internet access and snacks in their lounges to ease the stress of travel.

The MAGIC in-flight entertainment operates on JAL flights beyond Japan. It has children’s movies, a Disney Channel, a selection of video games and a children’s music channel (Japanese only). On aircraft with the latest version of the MAGIC system (MAGIC IV), children can occupy themselves by reading, listening to and interacting with two video storybook programs: Spot the Dog and Bob the Builder.

The nine-months-and-older kit varies depending on the route flown. On Japan-to-Australia flights, a warm meal such as a vegetable casserole will be served alongside a banana, crackers, bread and pudding. You will need to reserve a set for baby at the time of booking the flights. Special child meals require 24 hours’ advance notice. Typical selections include a hamburger, steak with gravy sauce, spaghetti, macaroni gratin, bread, cookies, a fruit-based dessert and yoghurt.

JAL kids’ entertainment kits vary in content depending on the route. For example, two types of kits are available on US and Europe routes (excluding Honolulu): a stationary kit with pencils, a ruler, notepad and eraser, and a refresher kit with a cup, toothbrush, hairbrush and tissues. Also on offer are model planes, picture books, playing cards, origami, building blocks and soft toys, depending on the route. Kids’ books and magazines are also available on board.

JAL does not have a fixed rate child fare as fares are as variable as adult fares. Child fares cover those aged two to 12 years. Zero-to-twos are considered infants and an adult is a passenger over the age of 12.

Babies travelling on a 10 per cent fare are allocated 10kgs, sum weight, for checked baggage plus either one fully collapsible stroller/pram or baby carrying basket or car seat. Children aged over two years can carry the same allowance as adults, which is 20kg.

Children under five years are unable to travel alone under any circumstances. Children 5–11 must travel with another passenger who is at least 16 years old or they will be classified as an unaccompanied minor. Children 12–17 are also able to use the unaccompanied minor service. The service ensures that a supervisor is with your child at all times. They will take your child to the flight and help them through customs/with documentation and return them to the guardian/parent at the end of the flight.

There are bassinets available, but you must book ahead. On board, baby kits (which contain nappies, wipes, bottled baby food, baby snacks, powdered milk, a baby bottle, spoon, cotton bib, pouch, straw and tray mat) are offered if requested, although supplies are limited. Babies receive their own “JAL Baby Cruise” kits; one for babies up to eight months old and the other for those nine months and older. Packed in a cute blue and yellow pouch, the up-to-eight-months set includes two types of strained baby food in small jars, a JAL baby spoon in the shape of a little airplane, a bib decorated with a JAL Baby Cruise logo and a straw.

Snowboarding at Hotham with a baby

Travelling to the snow with a baby isn’t as difficult as you think, as Jennifer Ennion discovers... 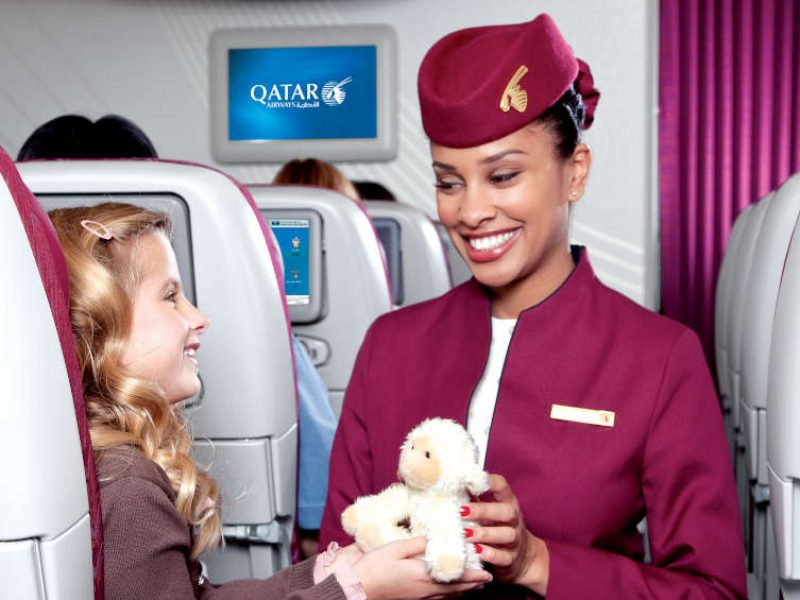 The 7 best airlines to fly business with your family

There are luxury airlines and there are family-friendly airlines, but which are the best for...