Everything families need to know before traveling to Japan

HomeBlog Everything families need to know before traveling to Japan
Blog

Everything families need to know before traveling to Japan

Clean, safe, friendly and fun, Japan is one of the world’s most sought-after destinations for families. Here we rounds up what you need to know before you go.

Clean, safe, friendly and fun, Japan is one of the world’s most sought-after destinations for families. Here Amy Henderson rounds up what you need to know before you go.

From its irresistible cuisine to brilliant costumes and ancient architecture, Japan has captivated visitors for centuries. The Land of the Rising Sun has more jaw-dropping, memory card-filling, natural beauty than your itinerary could ever hold; ancient temples for children to explore, burn up a little energy and learn at the same time; and, of course, a surplus of crazy kawaii (cute) characters, robots, ninjas and samurais that are sure to kick the kids’ imaginations into overdrive. Add a mesmerising culture full of festivals and traditions, a wide-ranging climate, safe streets, mouth-watering cuisine, and more activities than you can karaoke about, and it’s no wonder Japan is one of the world’s most sought-after destinations for families.

But what do you need to know before you go?

The best time of year to go to Japan

Depending on what you want to see and where you want to see it, it’s a good idea to plan according to the seasons. If you’ve got a hankering to see the magical cherry blossoms in full bloom – and enjoy a hanami flower-watching party under the falling petals – you’ve got a short window, as the blossoms generally only last around two weeks. It’s important to book inside the time range for the region you’re visiting. The trees in Tokyo and Kyoto usually start to bloom in the last week of March and peak a week after. But as Japan has such a varied climate from north to south, you can catch the season a little earlier in the south and later in the north of the country.

Autumn is incredibly beautiful, too, when the trees transform with blazing hues. From mid-September to the beginning of November, the temples of Kyoto and Nikko (to name just two) are surrounded by hectares of yellow, orange and red tones. The area of Fuji’s five lakes and Kanazawa are also particularly breathtaking.

A sight the kids are sure to love is the snow monkeys bathing in hot springs. To do this, head over in the snowy months from December to March. A plus for travelling in the winter is that prices are usually lower and the crowds are fewer in the cities. But in the country’s alpine districts and in the north of the country, the ski season and the giant dumps of powdery snow means a phalanx of world-class ski resorts with someof the best powder snow in the world and great facilities targeted at little ones.
Read: Snow holidays in Japan

Another thing to take into consideration are national holidays. During Golden Week (29 April to around 3-6 May) the whole country goes on holidays, so travelling at this time can affect your plans. And while visiting over the New Year holiday can be a lot of fun, many attractions, restaurants and shops are closed, and getting around can be a tad difficult.

Japan is a cash-based society and it is a good idea to have cash on hand wherever you go, especially outside of the major cities, as the likelihood of credit cards being accepted decreases in smaller towns where it can also be difficult to find ATMs. Cash is also usually the only way to pay for entrance fees at tourist sights and small shops, plus the many vending machines that Japan is famous for.

Japan has an impeccable network of buses, subways and trains. Major cities like Kyoto, Osaka and Tokyo have fast and punctual-to-the- second subway systems with stops announced in English as well as in Japanese. If you are travelling between cities, a Japan Rail Pass, which is available only to foreign tourists, is the most cost-effective way of traversing the country, offering unlimited use of Japan Rail trains – including the awesome Shinkansen ‘bullet’ trains – valid between seven and 21 days, at a cost that local residents can only dream of. If you’re planning to flit around the city, an unlimited travel day ticket (called Ichinichi Jōsha-ken) is good value for money. If you’re spending more time in one place, a pre-paid Suica card is recommended. Both these can be purchased at station windows. We advise you write your destinations in both English and Japanese script before you travel as this vastly helps when asking for directions and clarification.

Navigating cities can be confusing, as Japan numbers its addresses by block, not street, so you’ll need Wi-Fi and access to a map app. Pre-paid data SIM cards are available, but we suggest renting a Pocket Wifi online before you go for faster service and broader coverage.

More adventurous eaters might like to get more hands on with shabu-shabu, a Japanese hotpot dish where the food is cooked piece by piece at the table. And they’re going to love noodle restaurants, where they’ll be encouraged to slurp as loudly as possible.

Still can’t satisfy your fussy offspring? From the bells and whistles of ordering their dinner via vending machines to the quirky cuisine of the country’s whacky themed restaurants, Japan has a way of getting even the pickiest eaters to come around.

Just don’t forget that it is considered poor manners to eat takeaway food while walking and you should consume food in front of the stall you purchased it from.

Speaking of etiquette, proper manners are valued highly in Japan and foreign visitors should do their utmost to avoid a cultural faux pas.

It starts at hello! Bowing is the traditional Japanese greeting and, regardless of your age, you should always bow politely when you greet someone, thank them or say goodbye.

When entering a Japanese home, you must place your outdoor shoes at the doorway and wear the house slippers your host provides, and you must only step on tatami mats with bare or socked feet. When it comes to bathroom breaks, a whole new set of rules apply, and you’ll find a separate set of toilet slippers on hand.

It is traditional when staying at a ryokan not only to lose your shoes but also the rest of your gear! But don’t worry, you’ll find traditional yukata – kimono-like-robes – in your room to wear in public spaces and gardens.

Onsen (hot spring) bathing is a quintessential part of the Japan experience and many are family-friendly. But there’s an art to it. First, you’ll need to wash yourself thoroughly on one of the wooden stools in the onsen shower before entering the generally gender-exclusive communal hot springs. In the nude. You see, bathing suits are forbidden in the onsen, which means that everyone else is also in the nude, which can be a little disconcerting the first time. But within a few minutes you will cease to care as you relax into your onsen experience. Just remind junior that they’re not in a place for belly flops or backstroke.

Japan experiences hundreds of festivals each year, so it’s a good idea to do some research to see which ones most tickle your fancy.

Children’s Day is a Japanese national holiday which takes place annually on 5 May, the fifth day of the fifth month, and is the final celebration of Golden Week. Families fly koinobori banners in the shape of a carp (a symbol of determination and prosperity) for each child in their house. There are many events held right across the country and kids indulge in kashiwa-mochi (sticky rice cakes wrapped in leaves) and other sweet treats.

More left-field is Awa Odori, a city-wide party thrown in Tokushima City. With colourful costumes, dances, games, gongs, taiko drums and flutes, it’s an experience like no other. Or if defying gravity is your thing, the Akita Kanto festival sees participants balance 12-metre lantern poles on their palms and foreheads.

While Christmas is not a holiday in Japan, celebrations still take place each Christmas Eve and the decorations are spectacular. In Tokyo, huge trees and amazing illuminations fill the streets. Shogatsu (New Year) is a national festival with festivities held at shrines and temples, with Tokyo’s Meiji Shrine and Kyoto’s Fushimi Inari-taisha attracting more than a million visitors over a few short days.

Some of the biggest celebrations happen in winter including the Sapporo Snow Festival, the biggest winter festival of them all. This seven-day celebration, held in February, sees epic snow sculptures and ice carvings line the streets of Sapporo. Children will love the festival’s awesome amusement zone with giant ice slides and snow tubing. The Otaru Snow Light Path Festival, a 10-day festival, about 30 minutes by train from Sapporo, coincides with the Sapporo Snow Festival, and the pretty city of Otaru is transformed into a magical world of glowing lanterns and snow sculpture that will enthral the kids.

All-inclusive snow adventure for all.
i
Japan
Prev
Next 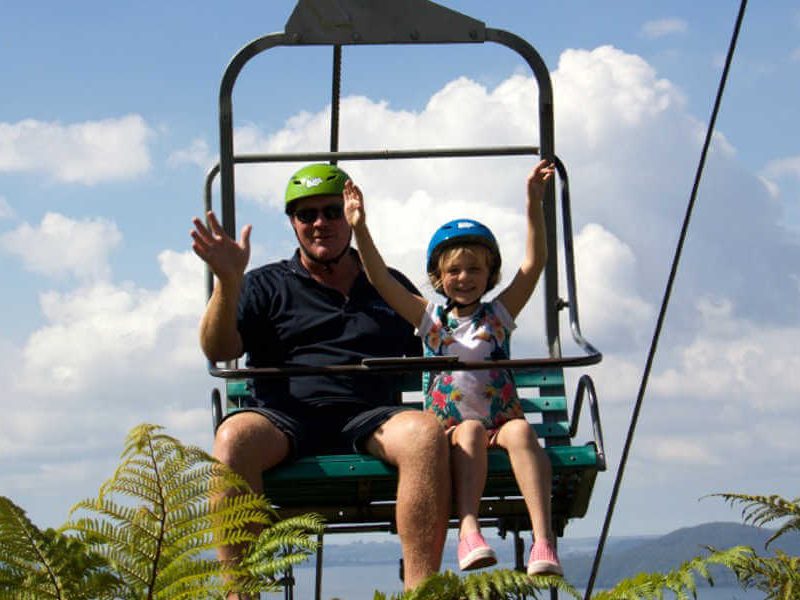 HWK Mummy Blogger Cooker and a Looker's tour of New Zealand’s North Island culminated in a... 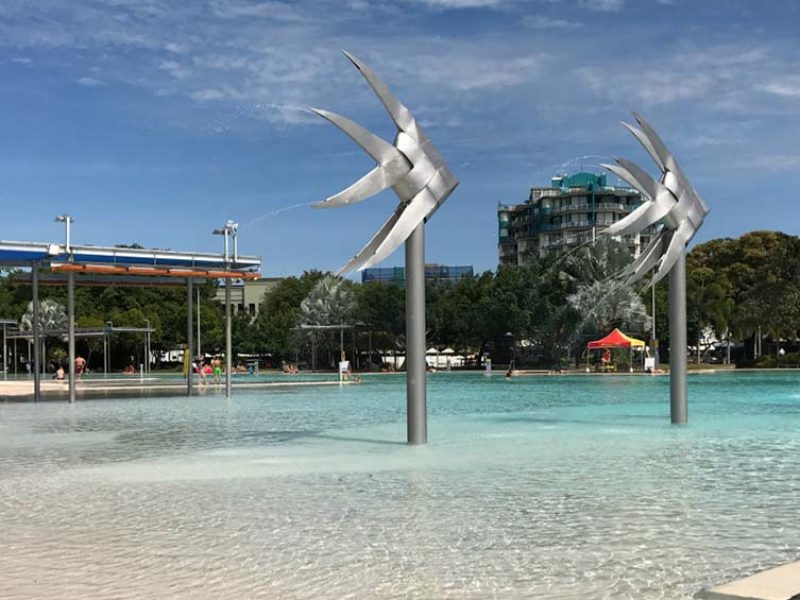 Find out why the Novotel Cairns Oasis Resort is the ultimate family holiday destination from...