20 family-friendly things to do in Vietnam

HomeDestinations Asia 20 family-friendly things to do in Vietnam
Asia

20 family-friendly things to do in Vietnam

For families and children with an adventurous spirit, Vietnam is an exciting and rewarding destination, offering unique lessons in culture that are not soon forgotten.

For families and children with an adventurous spirit, Vietnam is an exciting and rewarding destination, offering unique lessons in culture that are not soon forgotten. Add these experiences to family’s Vietnam to-do list.

Locals almost always refer to Ho Chi Minh City by it’s pre-war name, Saigon. Central Ho Chi Minh City, which encompasses the tourist precinct of District 1, is the bustling heart of this dynamic, industrious city and is the largest city and economic capital of Vietnam.

For a taste of modern Vietnamese city life, head to Ben Thanh, an enormous covered market in the city centre. Almost anything that can be sold is found here: a dazzling array of fruits and vegetables, meat, local coffee, clothes, cosmetics, electronics, art, souvenirs and toys. Don’t be afraid to haggle but stay good humoured and only bargain if you really intend to buy.

Probably the oldest pagoda in Ho Chi Minh City, this very traditional pagoda contains ornate tombs, a white statue of the Goddess of Mercy and an impressive sanctuary filled with gilded Buddhist figures.

These tunnels are located in Chu Chi district, about 30km northwest of Ho Chi Minh City. During the Vietnam War, the Viet Cong dug out this elaborate underground labyrinth, hiding out within the 200km long maze of tunnels for 20 years. A tour of the tunnels is not for the claustrophobic – although some of the tunnels have been modified to accommodate visitors. Kids will enjoy crawling through the tunnels and seeing the soldier’s living quarters, dining in the underground kitchens and scrambling out of emergency exits. For adults and older kids, a visit to Chu Chi is also a sobering lesson on the hardships of war.

Take a stroll along the charing Book Street. The many bookstores have sparkling fairy lights and little reading nooks. Along the tree-lined stret you’ll also find some coffee houses and local art. Located near the Cental Post Office.

Saigon Saigon Rooftop Bar at the Caravelle Hotel is where journalists watched through shutters during the war as the front drew closer in the lead up to the Fall of Saigon. Ho Chi Minh is rapidly developing and this bar is one of the oldest in the area with a rich history. Nowadays you can watch the city lights and enjoy a light breeze while sipping on a mocktail.

Hanoi should not be missed on a visit to Vietnam. Friendlier and more relaxed than bigger, busier Ho Chi Minh City, it is blessed with impressive colonial administrative buildings, hotels, churches and museums and lovely parks and gardens, making it one of the greenest and most beautiful cities in Asia.

This huge, impressive mausoleum is the final resting place of the great revolutionary and former president of North Vietnam. It’s also one of Hanoi’s top tourist attractions. Close by is the Ho Chi Minh Museum, and “Uncle Ho’s” house on stilts, perched across from a small pond in a pretty, mango-tree filled garden.

The pleasant surrounds of this lake in the centre of Hanoi make a welcome break from the heat of the city. It’s perfect for strolling, cycling and picnicking. Kids will be fascinated to hear how the lake was named.

According to legend, Emperorer Le Loi, worried about the advancing Chinese, was boating on the lake when a giant tortoise rose from the depths and presented him with a magical sword. The tortoise made him promise he would take the sword back once he had defeated the Chinese. The emperor was true to his word and returned the sword to the lake. Since then it has been known as Hoan Kiem, the “Lake of the Restored Sword.” A shrine has been built in honour of the tortoise on an islet on the western side of the lake. On a northern islet, across a red wooden bridge, is the beautiful Ngoc Son Pagoda.

Several waterside theatres offer performances of the traditional water puppets, including the municipal theatre across from Hoan Kiem Lake. Both children and adults will delight in the beautiful wooden puppets, including dragons, warriors, fairies and fishermen that seem to float on the water as they act out magical folktales.

This is a popular day trip from Hanoi, but longer cruises are also available. Halong Bay is one of Vietnam’s most spectacular natural wonders, with literally thousands of uninhabited limestone islands rising from the peaceful, emerald-coloured waters of the bay. Some of the islands have secluded beaches and grottos to explore. Bring your swimmers for a dip in the clear waters of the bay. Most tour operators will include a delicious seafood lunch on board.

The popular beach resort of Nha Trang on the south coast is Vietnam’s top destination for watersports. The town itself holds little appeal for families but there’s an excellent choice of accommodation within a stone’s throw of the 7km white sand beach. The premier attraction of Nha Trang is rest, relaxation and glorious sunset seafood dinners.

The abundant tropical fish and coral around Nha Trang’s reefs make it a good spot for diving and snorkelling. Most of the reefs are relatively shallow, making it ideal for snorkelers and novice divers. The dive boats often make trips to the pristine islands off Nha Trang’s coast but most dive sites are within an hour’s journey from pier.

The Cham Towers to the north of the city are the remnants of brick temples built by the Cham people between the 7th and 12th centuries, in honour of the goddess Po Nagar.

Only four crumbling towers remain, and these are still used as places of worship. A small group of nuns will happily, if silently, guide you around, and there is a small and interesting museum displaying photographs and ancient statues. The hillock upon which the Cham Towers sit offers a great panorama of the surrounds with views of the Cai River and the city of Nha Trang.

A short flight or 17-hour overnight train ride away from Ho Chi Minh, Hoi An is an ancient trading port.

Hoi An celebrates its lantern festival every month.  Even outside the main festival the town is alive with lanterns every night. A cool option to celebrate is to take a boat up the river with a local boatman and releasing a paper lantern with a wish for happiness and good fortune.

14. Explore the countryside by bike

Most guesthouses have bikes so make sure to cycle through rice paddies, back streets, past farmers in traditional non la conical hats and water buffalos pulling wooden ploughs, and stopping for a bowl of pho for breakfast for less than a dollar.

15. Take a half day trip to My Son to see ancient ruins

Explore Hindu temples built between the fourth and 14th centuries.

16. Have tailored clothing made

Hoi An is home to over 300 tailors and leatherworkers. We recomomend knowing what you want ahead of time and taking pictures or a garmet for them to replicate exactly. Make sure you leave plenty of time for fittings and further alterations if needed. Hoi An taylors definately aren’t the cheapest way to have clothing made but are a good option if you want something specific you cant find elesewhere. The quality varies trememdously depending between tailors.

It’s only a 10-minute drive to the coastline, where a thriving guesthouse scene has grown alongside massage shops and restaurants serving seafood and traditional dishes with cheap beer and smiles.

The stunning 67-metre-tall Lady Buddha sits high on a mountain and is the tallest Buddha statue in Vietnam. Just south of Danang the Marble Mountains are limestone-and-marble peaks named after the five elements of nature. They are said to have grown from a dragon’s egg shells. You will need around four to five hours to explore the beautiful caves, shrines, temples and gardens. Make sure to start early in the morning before the heat of the day sets in.

In the evening, when the temprature had dropped explore the town on foot. Head toward the colourfully lit bridges that span the Han River, and watch the Dragon Bridge breathe fire and water on the weekends.

19. Walk across the famous golden bridge at Ba Na Hills

Make sure to sample what we think is some of the best street food in Asia, like the amazing banh mi sandwiches, the banh xeo (crispy pancake) and bowls of beef and noodle pho topped with fresh herbs and chilli. 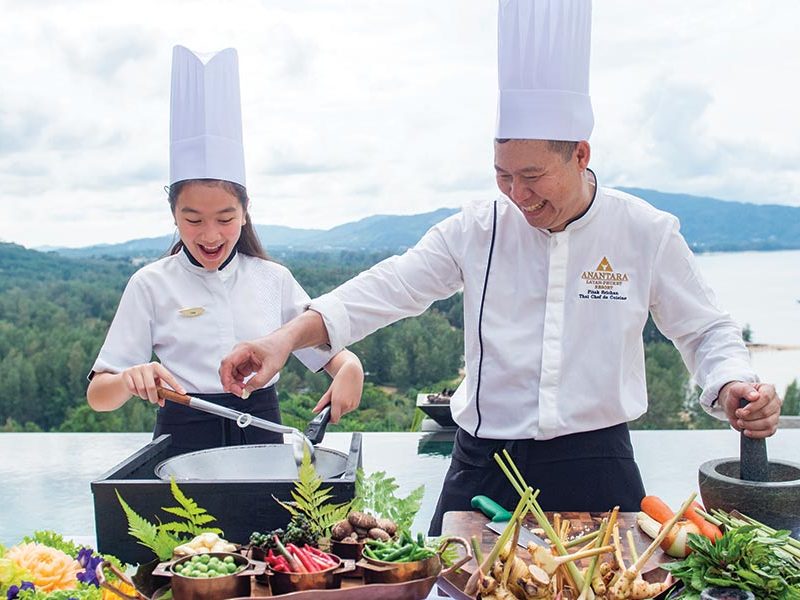 Learn the ways of a master hotelier with Anantara

Mini hoteliers in the making can now learn the ins and outs of running a five-star hotel at... 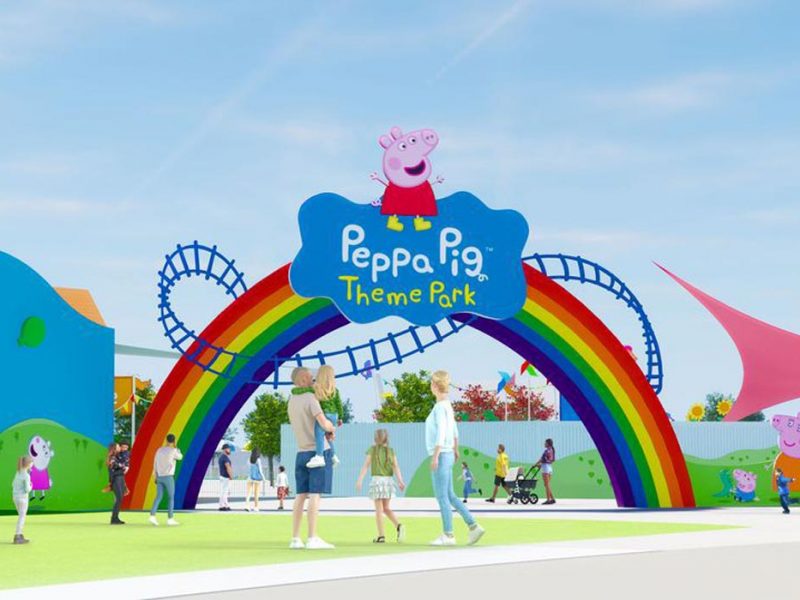 Merlin Entertainment has partnered with Hasbro to bring a Peppa Pig theme park to Florida in...