Winter is approaching, and that means it is playtime for snow loving families in Australia and New Zealand. Helen Hayes gets the lowdown on what’s new this season at some of the major ski fields on both sides of the ditch.

Winter is approaching, and that means it is playtime for snow loving families in Australia and New Zealand. Helen Hayes gets the lowdown on what’s new this season at some of the major ski fields on both sides of the ditch.

There is something magical about skiing or boarding through, or by, stands of twisted snow gums, following your kids as they blast down the mountain, leaving their more cautious parents in their snowdust. And because kids learn so quickly, you had better get used to it.

In Victoria, Mount Hotham, with its spectacular ridge-top village and multi-valley ski experience, has the Big D area for kids. It is located away from the main hub so kids can learn in safety and on beginner-friendly terrain. Once they get their ski legs, they can progressively explore the other areas of the resort, before heading back up to the village with tired legs and happy faces. Hotham made a $4.5 million investment in snow guns last season, so even if Mother Nature doesn’t play nice early in the season, there will be snow to play on.

For families wanting to try skiing, snowboarding or cross-country skiing for the first time, Lake Mountain Alpine Resort, approximately two hours from Melbourne, is the place to go. Do a day trip or better still, stay at nearby Marysville. While best known for its 37 kilometres of cross-country skiing trails, this year Lake Mountain Alpine Resort is expanding its snowboard offering with lessons for kids seven to 14 years old in the new Burton Learn to Ride program. The program is also available for kids aged three to six who have already progressed through the Burton Riglet Park program. A new magic carpet will be installed this season to carry kids in the program, saving those legs for making turns on the slopes.

Falls Creek has big news this season with a brand-new quad chair replacing the older Eagle chairlift that carries riders up from the Village Bowl to the top. Cleverly, some of the old chairs will be used to create artworks around the European-style village. Mt Buller will be ready to roll when the season starts thanks to its high-tech SnowFactory, and the village is as beautiful as ever with a huge range of accommodation among the snow gums. Buller is home to many of our Olympian Flying Kangaroos, with the training facilities for both moguls and aerials improved for this season. And at Mt Baw Baw, a wonderful resort for first-timers or those who are just as happy with on-snow activities as skiing or snowboarding, meet the new dingo pup Warragul and her dingo friend Rowdy at the new Dingo Resource Centre.

In NSW, families with young kids might like to start their ski journeys at Selwyn Snowfields, which has no accommodation on site but plenty nearby, or at the charming Charlotte Pass – the highest ski resort in Australia. But there is no doubt that the two main players are Thredbo and Perisher. Thredbo celebrated its 60th anniversary last season and, while big plans are in the wind for future years, new guided backcountry tours will be popular this season. There is a range of tours for all levels, from the 3.5-hour beginner tour to the seven-hour tours for advanced riders, with participants learning important backcountry safety skills while enjoying some incredible terrain outside the resort.

Perisher, the largest resort in the Southern Hemisphere, has announced a new quad chairlift will replace the popular Leichhardt T-Bar for the 2019 season, but has spent big on more snowmaking and a new groomer (it now has 18), as well as other improvements this season. Perisher is enormous with four linked ski areas to explore (Blue Cow, Smiggin Holes, Guthega and Perisher) with all kinds of terrain for all people.

New Zealand resorts, like most in Australia, had record-breaking seasons last year and they hope to replicate that in 2018. Generally speaking, the ski experience is a little different in New Zealand with no on-snow accommodation at most resorts (Cardrona has 15 apartments on snow), but when you have places like Queenstown, Wanaka and Methven to stay in, your snow vacation becomes a lot more interesting. There are more restaurants to choose from, more things to do, more accommodation choices and you can choose to ski at different resorts on different days if conditions warranted it.

On the North Island, Mt Ruapehu, with its two resorts of Whakapapa and Turoa, is making a name for itself with massive investment over the past few years. And it is not stopping anytime soon, announcing a NZ$25 million gondola to run from the base of Whakapapa up to the spectacular Knoll Ridge Café in the 2019 season. Whakapapa and Turoa resorts are both located on the striking Mt Ruapehu, a live volcano and the highest point in the Central North Island.

On the South Island, Mt Hutt, voted Best Ski Resort in New Zealand at the 2017 World Ski Awards, is 30 minutes from Methven in the picture-postcard Canterbury region. Improvements have been made to snowmaking, among other things, but one of the best things is that kids 10 and under will still ski free at Mt Hutt, as part of the Kids4Free program that also offers free accommodation, transport and meals at participating members in Methven. Now kids aged 10 to 17 years old will pay less for four-day multi passes as well.

Sister resorts to Mt Hutt in the NZSki stable are Coronet Peak and The Remarkables, both near Queenstown. Coronet is the closest to town at just 25 minutes, with the Remarkables 40 minutes away on the other side of the gorgeous town. Coronet is known for its rollercoaster terrain and its night skiing on Friday and Saturday nights, and now on Wednesdays as well. Thelearning area for Skiwiland kids, from three months to five years, has been reconfigured to improve and speed up the ‘first steps’ learning experience. At The Remarkables, the beginner terrain will be growing a massive 70 per cent this season, and will have a new magic carpet-style conveyor to access the area, which is easily accessible from the new base building.

Further away from Queenstown and closer to Wanaka sits Cardrona and Treble Cone. Cardrona added the new Chondola (that’s a combined chairlift-gondola) last season, and is planning to spend NZ$20 million on facilities over the next three years, including around the base buildings. Cardrona has brilliant all-round terrain, an exceptional ski school set-up and 15 apartments so you can enjoy more time on Cardrona’s creamy slopes.

Treble Cone is known for its steep terrain but has worked on developing its intermediate offerings and the beginner area for kids is gentle. This season visitors won’t have to worry about chains with a free mountain shuttle from the base and a free return service from Wanaka if you book lessons. Group lessons have been capped at five which ensures everyone learns more quickly and can then get out onto the amazing terrain at Saddle Basin – my family’s favourite.

This article appeared in volume 55 of Holidays with Kids magazine. To subscribe to the latest issue, click here. 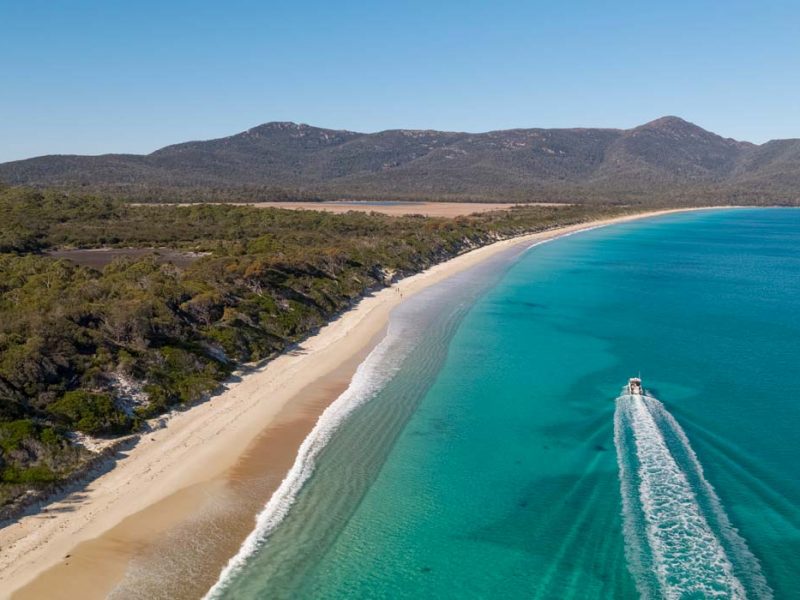 Explore the Freycinet Peninsula on the water with Freycinet Adventures