New York City is one of the few cities in the world that has reached truly iconic status and become part of world culture. Featuring in countless books, movies and television programs, it is the ultimate in glitz, glamour and urban cool.

Everyone thinks they know what New York looks like, from its yellow taxi cabs to the steam rising from its sidewalk vents and the hotdog stands on every street corner. New York is all that and then some; just what you expect and so much more. Visit it for the first time and you’ll be thrilled. Return for a second bite of the Big Apple and you’ll be surprised at how this city is constantly reinventing itself.

Your kids will love this place, and love you for taking them there. It’s the ultimate cool destination, and will give kids enough bragging rights to last them into the next decade. Who wouldn’t want to see all the sights that have been associated for so long with movies and television programmes? Who wouldn’t want to finally see the Statue of Liberty and Empire State Building up close and personal? From Spiderman to King Kong, walking through New York is like walking through a giant movie set.

Teenagers especially will also love the shopping, which is first-class and far surpasses anything on offer in Australia. The museums are superb and often have special programs for kids; Central Park is an endless source of fun and relaxation; the hotdogs sizzle on every street corner; and there is enough entertainment, music, sporting activities, sights and sounds to keep any kid happy for weeks on end.

The Statue of Liberty

The Statue of Liberty is New York’s top tourist sight, and rightly so. Although the interior of the statue and ascent to the crown are now off limits, Liberty still deservedly pulls in the crowds. A new observation platform on the 12th floor of the pedestal allows you a glimpse of the statue’s interior through a glass ceiling; the framework has to withstand buffeting Atlantic winds and was designed by Gustave Eiffel, later famous for his Parisian tower.

The free guided tours by rangers are very informative, as is the museum, which traces the history and symbolism of the statue, and has a full-size replica of Liberty’s otherwise hard-to-see face. The kids will enjoy it, and there are plenty of toilets and places to eat on both islands. To get there, take a ferry from Battery Park at the tip of Manhattan Island.

Central Park is a vast green space in the middle of New York’s bustle, and a great place for a picnic or stroll. You’ll also find an ice rink in winter, great puppet shows at the Swedish Cottage Marionette Theatre, and the Wildlife Conservation Center, which is a small zoo with sea lions, penguins and monkeys, and especially fun at feeding time. There are also plenty of playgrounds scattered around the park, a lake with rowboats and a pond with remote-controlled boats for rent.

New York City has a number of zoos but the best, by far, is the Bronx Zoo, which is known for its well-designed habitats and adrenalin-pumping rides. However, if you aren’t in visiting the city for long and are a little pressed for time, the zoos in Central Park and Prospect Park are great for short visits.

Times Square, with its huge neon advertisements, horseback cops and yellow taxi cabs, is more classic New York. A huge Toys R Us, a candy store, a Hard Rock Cafe and plenty of fast food will keep kids entertained. The theatre district is nearby and if possible you should certainly try to catch a musical, including long-running classics such as The Lion King or Beauty and the Beast. Big hotels will book you tickets if you have plenty of money to spare, but otherwise you can queue at the TKTS booth in Times Square for same-day tickets (cash only).

New York has some of the world’s largest and best museums, and it would take a year to visit them all. The American Museum of Natural History is brilliant. Kids will love the whale and dinosaur skeletons, the new spectacular planetarium and the hands-on Discovery Room for kids aged 5 to 12 years, where they can solve scientific challenges and do puzzles. There are story times and special kids programmes at regular intervals.

The vast Metropolitan Museum of Art (1000 5th Avenue at 82nd Street) is superlative. It isn’t really geared to younger kids, but they are bound to find something that takes their fancy, from medieval armour to a complete Egyptian temple.

For the quintessential summer in New York experience, head to Coney Island to play wile the say away at the aquarium, take a ride on an amusement park ride, stroll along the boardwalk and bite into a sizzling hot dog.

There really isn’t a best time to be in New York, since the city that never sleeps just keeps on entertaining year-round. The best of the weather is in spring (May and June) and autumn (September and October) when the weather is mild and pleasant.

In July and August many New Yorkers flee the city on weekends, making museums and restaurants a little less crowded, but the weather is hot and humid. January to April is when you are most likely to get discounts at hotels.

In winter be prepared for the weather and temperatures that often fall below zero, with a biting wind chill factor. Still, this is the best time to go for theatres and performing arts, and since the Broadway shows are generally slower, you have more chance of getting tickets.

The Christmas period is magical, with terrific shopping, street lights and all manner of Christmas events, but expect to pay top dollar for hotels.

Make sure your passport is valid for at least six months from the date you intend to return to Australia. For more information you can contact the Embassy of the United States of America in Australia.

The United States administers a strict entry regime that also applies to transit passengers. If you’re visiting the United States for business or pleasure for 90 days or less, you may be eligible to enter without a visa, under the Visa Waiver Program (VWP).

In all other circumstances, you’ll need to get a visa before you travel. Get advice from an Embassy or Consulate of the United States on visa requirements.

Used mainly for domestic flights, LaGuardia Airport is smaller than JFK but closer to midtown Manhattan.

About the same distance from Midtown as JFK (16 miles), Newark Liberty International Airport is used by many New Yorkers and is a hub for United Airlines.

The airport you chose to land in will either depend on the flights available or where you are staying in New York.

The excellent New York Subway is safe and a very efficient way to get around the city for anyone with older kids, even if a little confusing initially. (Give your kids the challenge of working it out.) The fare is US$2 for everyone, except kids under 44 inches tall, who go for free. However, it’s much easier with a stored value MetroCard, which provide a variety of options, including a seven-day pass.

Unfortunately, the subway isn’t really that great for those with toddlers or strollers, since there are long walks, steps and lots of crowds. It might be better getting a taxi for shorter distances.

The USA doesn’t exactly have a reputation for fine cuisine, but New York will is in a league of its own. Home to some of the world’s best restaurants and specialties from all over the world, thanks to its huge immigrant population, its a party for the tastebuds. Despite all the excellent ethnic variety, the old American staples and children’s favourites – pizza, hotdogs and burgers – are to be found everywhere, and some of them very good. One thing is for sure: your family will never go hungry in New York.

Anyone who likes shopping has found paradise on earth in New York. Stores don’t seem to have standard opening hours, but most come alive after 10am and stay open until around 7pm. They operate every day of the week and generally Thursday is late night shopping. Sales tax adds 8.65% to your bill (it isn’t included on the ticket price) but isn’t applied to clothing or shoes values at under US$110. There are shopping listings online at Citysearch and Time Out New York.

You’ll be expected – in fact, obliged – to give tips to all and sundry. Bellhops get $1-2 per bag, hotel maids $2 per day, doormen who get you a cab $1-2. If your concierge helps you with any arrangements, a tip is also expected. Taxi drivers and waiters get 15-20% of the bill.

In summer, you can make do with little more than shorts and t-shirts, but in winter you’ll need to bring a full range of winter paraphernalia, from good coats to scarfs, gloves and woollen hats. If you are going to the theatre or better restaurants, New Yorkers generally dress up much more than Australians, so bring some smart casual wear.

A third of New Yorkers were born outside the USA and, therefore, the culture of the city varies quite substantially between ethnic groups and neighbourhoods. Many people say that New York doesn’t really have an American culture, but rather the culture of an international urban metropolis. If there is any shared culture, it is that of the immigrant experience that has defined life in New York since its founding. Others comment that, with most New Yorkers living in small apartments, using public transport rather than cars and eating a vast range of ethnic cuisines, its culture is more European than American.

Electricity mainly operates on 220 volts. You will need a power adapter for the USA.

No vaccinations are required to enter the US and tap water is treated and safe to drink.

New York is a generally a safe city. There is some pickpocket-related risk in, so be careful around crowded Midtown streets, packed subway cars.

You may recognise Grand Central Terminal from its multiple appearances in films and television shows, including North by Northwest, The Avengers, Gossip Girl and Men In Black. Take your chance to play director and select the perfect vantage point to photograph the atmosphere and the general hustle and bustle of this icon.

If you leave New York City without photographing the Brooklyn Bridge, did your holiday even happen? It’s best to arrive early to avoid crowds and take in the skyline views. Also, its a lovely walk with the little ones and once you arrive on the other side you can take a break in Brooklyn Bridge Park.

For that iconic skyscraper shot from up high it’s hard to beat the iconic Empire State Building. A landmark in its own right, it’s not just about the views here.

New York City’s celebrated elevated green space has food trucks, water features (which kids will love having a splash around in to cool down) and incredible views. A picture of this lush path and its surrounding architecture is an Instagram must.

There are no listings matching your search.

Try changing your filters or create a listing. 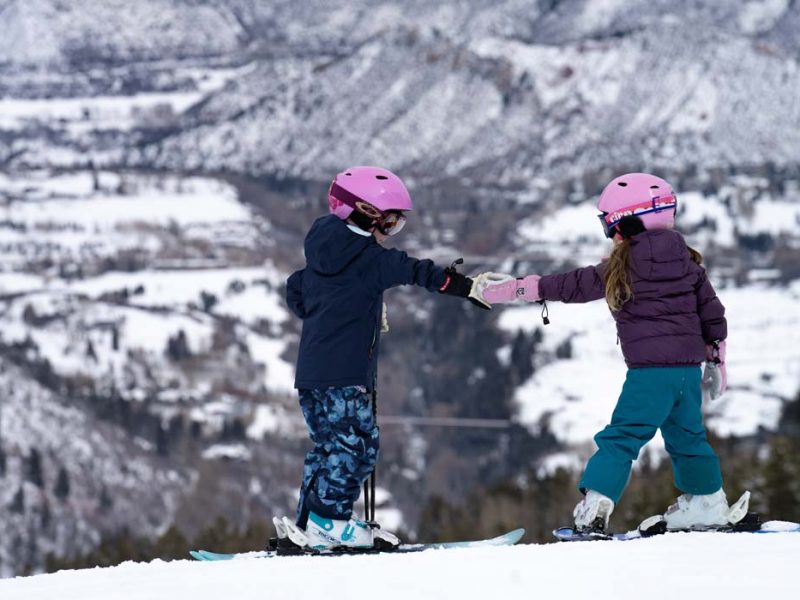 Aspen Snowmass: The glitzy Colorado playground perfect for families too

With four mountains to ski and ride, Aspen Snowmass is a whole lot of fun for... 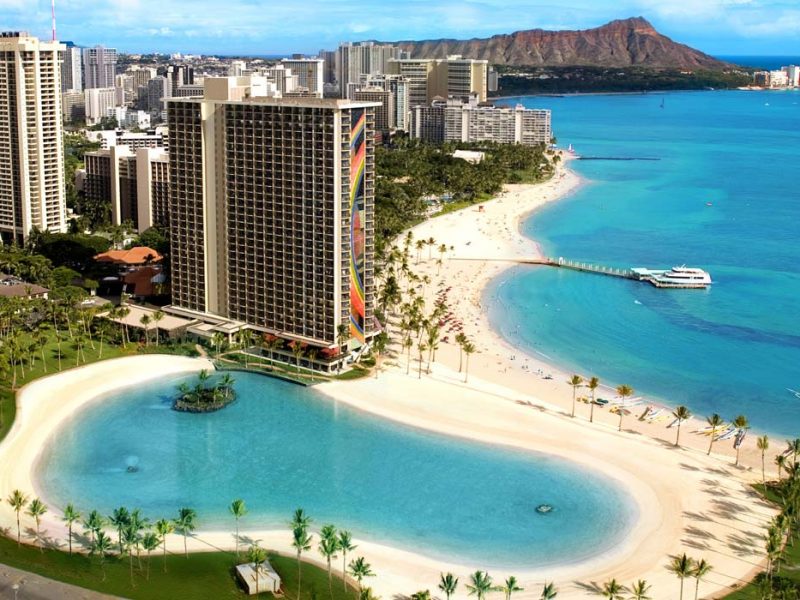 Hawaii is synonymous with paradise. These beachfront resorts have pools with epic... 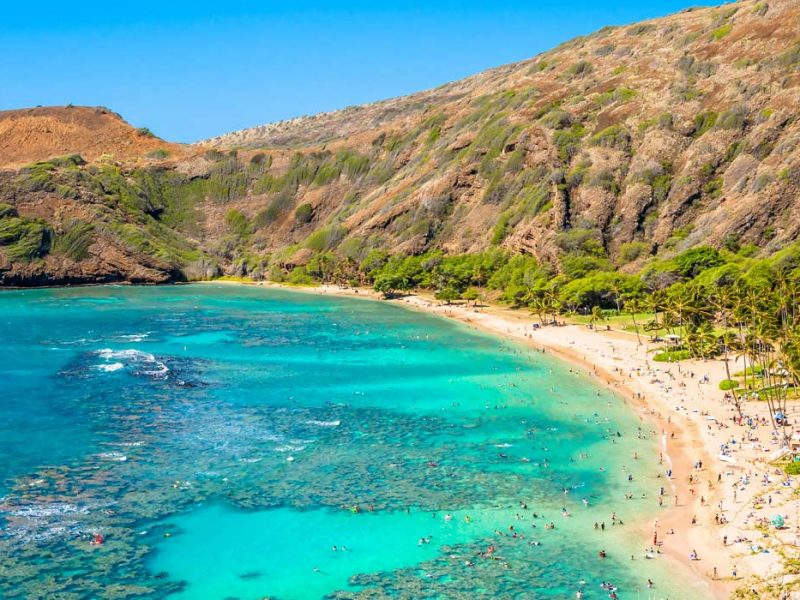 42 things to do with kids in Hawaii

There’s so much for families to love about Hawaii. 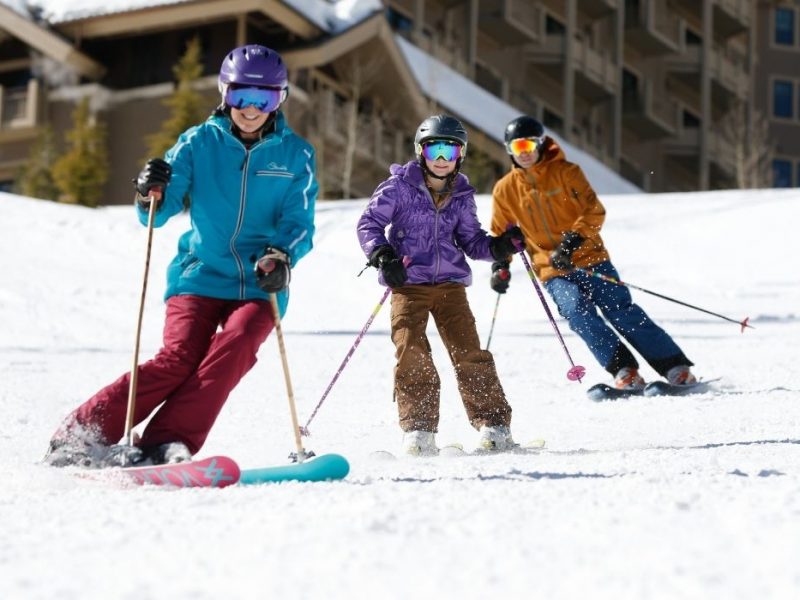 This epic prize includes accommodation, lift passes and return airfares for a...