Did you know there is awesome family skiing in Korea?

HomeDestinations Asia Did you know there is awesome family skiing in Korea?
Asia

Did you know there is awesome family skiing in Korea?

For a family seeking a holiday combining skiing and snowboarding with a side of culture and history, don’t look past Korea.

The popularity of Korea is on the rise, and not just because of K-pop and an ever-growing Netflix category. The country’s unique and fun culture also finds its way onto the ski fields and your family is able to have a quirky holiday while enjoying some great Korean ski resorts. A ski holiday in Korea will give the kids some serious bragging rights of having skied somewhere many of their peers have never been and it has lots of runs that are great for beginners. There’s also the “accidental learning” that comes with experiencing a new culture, plus honing in their singing skills with some post-slopes karaoke.

Korea’s first ski resort and largest resort, Yongpyong, was established near the city of Pyeongchang in 1975. It has now become known as ‘Korea’s ski mecca’. The Korean ski resort played an important role in the 2018 South Korea Winter Olympics.

Yongpyong is a well-respected resort that has grown in stature. Meaning “Dragon Valley”, Yongpyong is in the Gangwon-do region, about two and a half hours from Seoul. It is a decent-sized resort, with 1,740 hectares of terrain accessed by 14 chairlifts, including the Rainbow Gondola which runs from the base to the top of Mt Balwangsan.

Up top is Dragon Peak, with a restaurant, café and a great view from its vantage point of 1,458 metres, which makes Yongpyong the highest resort in Korea. For this reason, Yongpyong was home to the Slalom and Giant Slalom events at the Pyeongchang Olympics. Don’t stress about the descent from that height though, the resort’s English speaking instructors will have you flying down in no time.

Why Yongpyong is good for kids

Yongpyong is Korea’s best ski resort for families because of the European-style condominiums and a range of activities to be enjoyed off the snow. These include games rooms, an indoor water park, bowling and singing rooms. Also, take time to visit Woljeongsa Temple, one of Korea’s oldest Buddhist temples.

The pretty Alpensia Resort is quite close to Yongpyong, sitting in the Taebaek Mountain Range with 491 hectares of skiable terrain accessed by three lifts. The resort offers excellent slope-side accommodation including the InterContinental Alpensia Pyeongchang Resort.

The views over Alpensia Lake and the mountain are lovely, with one of the features being the Olympic ski jump. Visit the café at the top and visualise skiing down that ramp and becoming airborne. Apart from skiing and snowboarding, there’s a water park, traditional Korean bathhouse and lots of shopping to be done.

​Phoenix Pyeongchang Snow Park hosted the freestyle events at the Olympics and still has that cool edge. There are eight lifts to access the 378 hectares of runs but the best is the gondola up to Mont Blanc Restaurant to take in its alluring vistas. About half the runs are accredited for international competition and the ski school has English speaking instructors. Plus, the Extreme Park is rad for kids who like to jump off, slide on and flip over things.

It offers an Olympic-standard half-pipe – it was here that Shaun White won gold at Pyeongchang, with our own Scotty James taking bronze. Matt Graham won silver on the moguls course here and the aerial ramps and ski and snowboard cross courses are perfect for budding Olympians to train on.

When skiing all day is not enough, night skiing goes until midnight – and until 4.30am on White Night weekends.

Right by ​Phoenix Pyeongchang is the Blue Canyon Water Park. The water park’s indoor area is open during the winter. Fed by grade 1 natural mineral water from 700m underground, the water is as restorative as hot springs. It’s a wonderland of fun with a wave pool, a lazy river, slides and a ‘frog pool’ where kids can enter by sliding through a giant frog.

High1 Resort is one of the most popular ski resorts in Korea. It has three peaks – Jijang, Mountain Hub and Valley Top – that deliver around 21 kilometres of fun runs, accessed by three gondolas and seven lifts. Tackle the longest run, the Valley, which is a decent but gentle 4.2 kilometres, and make sure you have lunch at the Top of the Top revolving restaurant.

Accommodation options include both western and traditional (floor) beds. The High1 Palace Hotel has both and Valley Condominium is the most affordable option with western beds.

Another place to get some skiing and snowboarding K-style is at Welli Hilli Park, also located in Gangwon-do. This park is 896 metres above sea level and is sure to hit the spot for freestylers. It has an international-size superpipe, certified by the International Ski Federation (FIS).

The Fun Park is one of the largest terrain parks in Korea and has serious cred – it was the first ski resort in Asia to host the World Snowboard Championships back in 2009. It is also surrounded by forest, with gorgeous views from the mountain tops, and there is an indoor aqua zone in which to chill.

Seoul is an eclectic and vibrant city.  On one hand, a rich history and on the other, a future with dazzling architecture, sensational food and eye-popping fashion. Then there is its music: K-pop is a huge global phenomenon, with BTS at the pointy end. Ask the kids if they’ve heard of BTS, and cover your ears ready for the shrieks. The Korean impact on television and movies can also not be ignored. Netflix is home to a whole super-binge of K-dramas and K-movies.

Korea is on a roll and you can feel the buzz as you walk around the streets of Seoul. It is a heady mix of the old and the new, hand-in-hand and totally rocking it. Another fantastic attribute of Seoul is that you can be admiring an ancient shrine in the morning and skiing or snowboarding down a run just hours later.

Must do’s in Seoul

What to eat in Korea

How to get to Korea’s ski resorts

Take a shuttle bus direct to the ski resorts (booked in advance through the resort or a private shuttle company) from either Incheon airport (an international airport close to Seoul) or from Seoul itself. Alternatively, you can make use of the vast network of intercity buses, trains, and high-speed rail (the KTX).

For most of the resorts, the direct shuttle will be the quickest and cheapest option because taking other forms of transport will involve multiple modes of transport.

With all these resorts located in Gangwon-do, it would be easy to visit a couple or even all of them if you were so inclined. Add the various water parks, plus a few days of sightseeing in Seoul and you’ll have a snow holiday that won’t be forgotten in a while!

This article originally appeared in Ski & Snowboard with Kids magazine. Subscribe to the latest issue here.

With new lessons, a great kids activity centre and its first hotel set to open this year,... 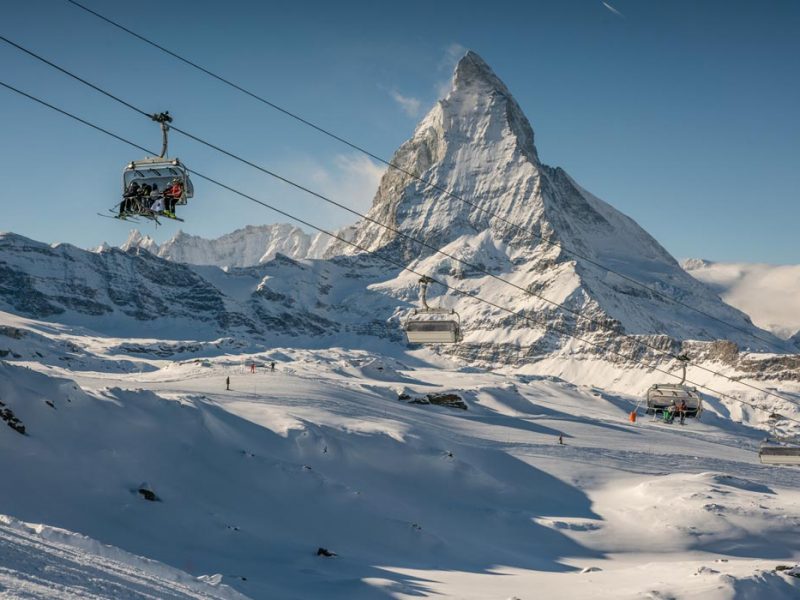 The 16 best ski destinations in Switzerland