Scotland’s 19th-century writer Robert Louis Stevenson was known as ‘Tusitala, the teller of tales’, but he couldn’t have been closer to the truth when he labelled Samoa ‘paradise’. In fact, the famous author was so enchanted by the South Pacific country – the cradle of Polynesia – he requested to be buried on Mount Vaea, a peak above his homestead, which has been refurbished as a museum.

Apart from the people, and the warm smiles that come with each greeting, there are the open air thatched roof fales (traditional homes) to visit, tantalising umus (underground oven feasts) to sample and a range of cultural celebrations to enjoy. Samoa is more than a beach or island holiday, it’s an experience. It is also a natural treasure, like the black pearls that are sprinkled throughout the Pacific.

Samoa consists of two relatively large islands, Upolu and Savaii and seven smaller islands, covering 2934 square kilometres in total. There is an exclusive marine economic zone covering around 130,000 square kilometres. Upolu, home to Apia and Stevenson’s grave site, is the bustling isle while Savaii, the big island reached by ferry, has a different type of charm that revolves around a rugged, volcanic landscape, scarred by massive lava flows and left with grassed craters, venues for games of kirikiti, Samoa’s version of cricket.

The famed Scottish author’s residence is today an impressive museum, able to be toured to see the antiques, photographs and relics that survived him. The grounds are home to charming, manicured gardens and the mansion itself, once substantially damaged in cyclones of the 1990s, now restored.

Also known as the Taga Blowholes, these powerful blowholes are located in the district of Palauli on the island of Savai’i in Samoa. The entrance to the blowholes is in the village of Taga and are well worth making the time for. As strong waves are pushed through the lava tubes, explosions of water reach dozens of metres high. The locals like to throw coconuts into the streams, where they explode in a dramatic fashion.

These small waterfalls are Tuamasaga’s natural playground: the original water slide. Kids and adults alike will love slipping down into the waterholes below, although if you’re visiting in the dry season, be sure to make certain that there is enough water to slide down before you start!

Best time to go to Samoa

Best time to go to Samoa

Samoa has a humid, tropical climate with a rainy season and a dry season. Even during the rainy season there is plenty of sunshine, and the days are slightly warmer and more humid. The most popular time of year to visit Samoa is during the dry season, but if you visit during the wet season a light raincoat is an essential item of clothing.

May to October, average highs of 30 degrees Celsius.

Ensure your passport is valid for at least six months from the date you intend to return to Australia.

If visiting Samoa for less than 60 days on a holiday, you won’t need a visa if:

Samoa is located in the South Pacific Ocean, just south of the equator and around 4400 kilometres from Sydney. Its close neighbours include Fiji, American Samoa and the Cook Islands.

Direct flights head to Faleolo International Airport from American Samoa, Fiji, Auckland, Brisbane and Sydney. If you’re flying from the northern hemisphere, flights via Honolulu are likely to be the most straightforward.

Getting around in Samoa is easy and inexpensive and makes for an interesting experience in itself. Timetables, however, should be regarded as ‘rough guides’ only! A bus service operates on both Upolu and Savaii. Check with the driver if the bus is headed to your intended destination.

A passenger and vehicle ferry services operates between Upolu and Savaii, and smaller boats can take you out to the other islands.

Car hire is also available, but be aware that petrol can only be obtained in the larger towns. Getting around by car is also quite straightforward. The coastal roads on Upolu and Savai’i are sealed; most of the other main roads are generally good.

On Upolu, taxis can be a great option for day tripping. However, this is not the case for taxis on Savai’i, which are only convenient for short trips.

Food in Samoa consists mainly of seafood, pork, chicken and tropical crops such as coconut and fresh fruit. The traditional Polynesian feast is cooked in the umu, an above-ground oven.

A good variety of places to eat out are found in the larger towns, with Western and Asian food on offer alongside Samoan fare. Many restaurants and bars offer fiafia nights during the week – Samoan buffet and cultural shows where the whole family can join in.

Businesses are open 8am to 4.30pm, Monday to Friday. Some shops close for lunch, between noon and 1.30pm. Saturday hours are 8am to 12.30, and on Sunday all shops are closed except for small convenience stores. Some good souvenirs to look for at markets and gift shops are handicrafts like carvings, woven bags, baskets, mats and shell ula (leis).

Tipping isn’t really common in Samoa, but it’s fine to offer money or a small gift if you feel you’ve received exceptional service.

If attending religious events, women should wear dresses rather than pants. In the city, it is recommended that you don’t wear swimmers as this may cause offence, and topless sunbathing is considered impolite.

Samoans have a very traditional Polynesian society, with each village vesting authority in the matai or chief.  Since being introduced to missionaries in the early 19th century, Samoans have become devout Christians, and have blended the religion with their ancient ways to create a version of Christianity that is, in many ways, uniquely Samoan. Respect for church leaders and reverent observation of the Sabbath and other religious rules is a must in Samoa.

When travelling around Samoa, avoid walking through villages during the evening prayer curfew (usually between 6pm and 7pm), which lasts between 10 and 20 minutes and is announced by the blowing of a conch shell, and it’s best to take things slowly and not drive through villages on a Sunday when the Samoans are in prayer.

Dancing and singing are a big part of Samoan culture. The fiafia is a village play that tells stories through dance movements – it can now be seen at many Samoan bars and hotels.

On 1 November 2017, Samoa’s Ministry of Health confirmed an outbreak of dengue fever. Outbreaks of chikungunya and Zika virus also occur, particularly during the wet season. It is important to ensure that your accommodation is mosquito-proof and to pack insect repellent.

Take care to not drink tap water or ice made from tap water, unless it’s been boiled first. Bottled water is available at most stores and restaurants.

As always, we recommend consulting a GP before international travel, particularly if you are an expecting mother.

Most people use Samoan in everyday conversation, although English is normally used for government and business and is spoken by most Samoans.

The Sopoaga Falls on Upolu are incredible, best viewed from a point above looking across where the mass of water seems to come from nowhere.

The Saleaula Lava Fields are a fascinating geological site in Savai’i. Kids can see where villages were buried after a volcanic eruption in the early 1900s, and the striking visual effect of the lava against the buildings that remain.

The beautiful and dramatic To Sua Ocean Trench is a giant swimming hole on Upolu with sheer moss-covered rock walls leading down about 20 metres to the aquamarine waters below. Climb down the ladder, or if you are there t high tide, jump in!

There are no listings matching your search.

Try changing your filters or create a listing. 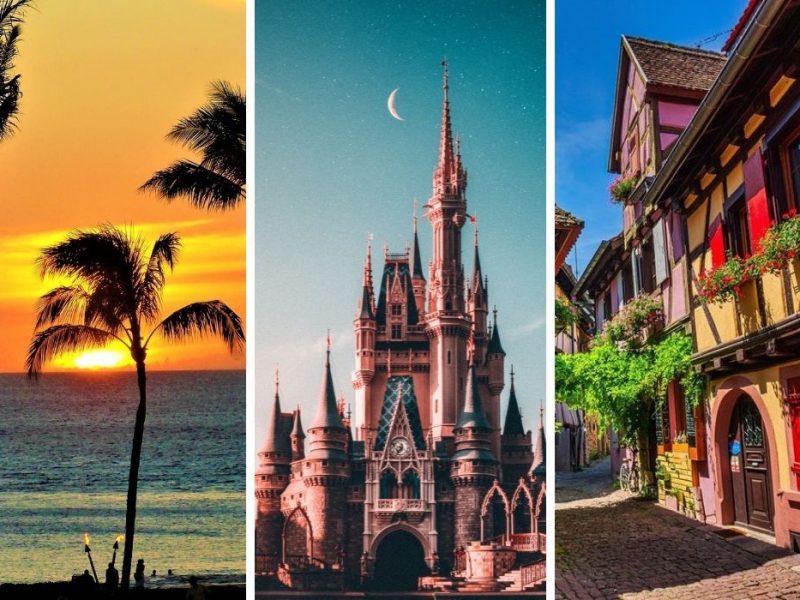 Real life Disney locations you can visit with kids

Fairytales really do exist! Step into the world of your favourite Disney movie by... 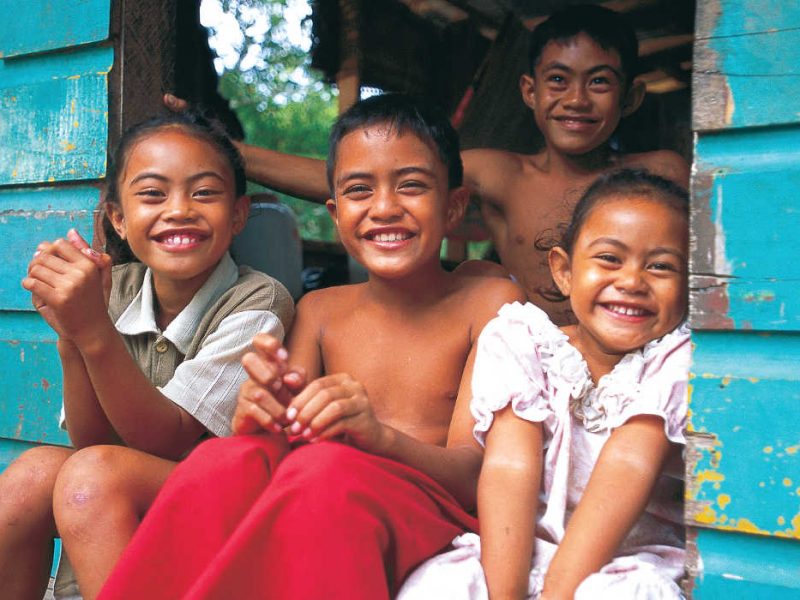 10 reasons to take your kids to Samoa

There may never be a better time to head to Samoa, an island that offers a South... 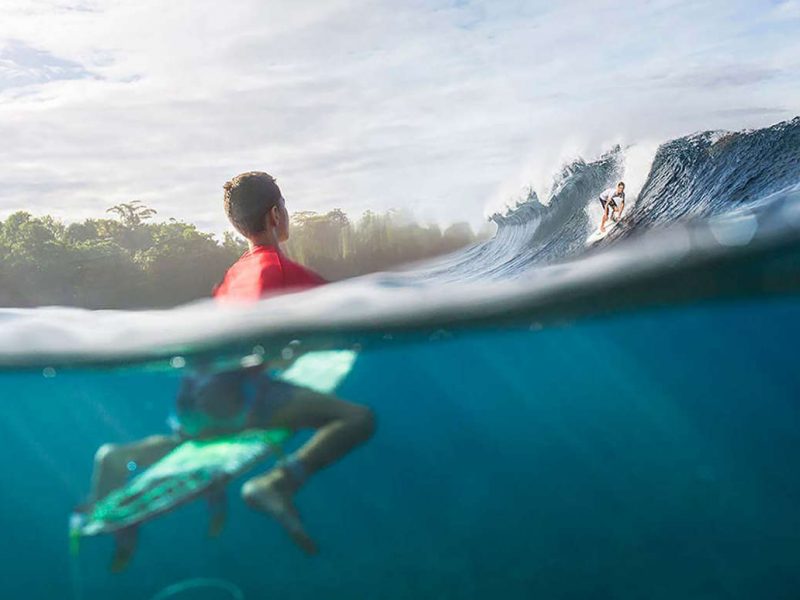 10 family-friendly things to do in Samoa

Samoa is more than a beach or island holiday, it's an experience. It is also a... 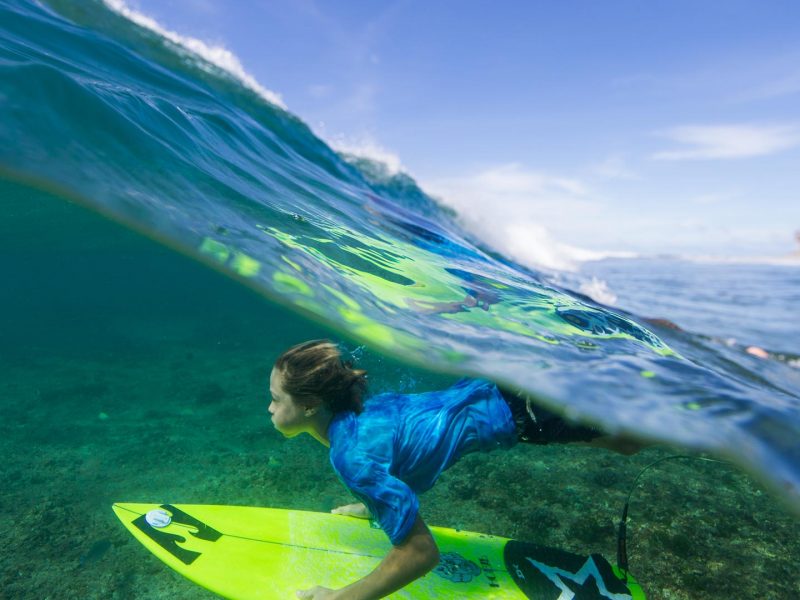 7 destinations to surf with kids

A surfing holiday is becoming the in thing for Australian families... and they’re...