Swimming in Gunlom Falls is safe. Each season before the park is open to the public, crocodile traps are set in the popular swimming areas like Gunlom and any crocs found are taken far away from the tourist hot spots.

Rene Young discovers that Kakadu has lots to offer even the youngest adventurers.

I cradle my two year old in my arms as she splashes happily on the shallow sandy shore of a natural plunge pool at the base of Gunlom Falls. The emerald green water is clear enough to make out my toes, it’s reassuring, as I can’t help to think that my daughter is the same size of a small and delicious chicken.

She continues to splosh about in delight making similar vibrations as a wounded bird would if had fallen into water, a nice little signal of an easy meal, should a cunning croc be lurking in the distance.

Fortunately, swimming in Gunlom Falls is safe, explains the nice lady in the Visitors Information Centre. Each season before the park is open to the public, crocodile traps are set in the popular swimming areas like Gunlom and any crocs found are taken far away from the tourist hot spots. She then caveats that “it’s never foolproof and you swim at your own risk”. Followed by a cheerful “…we’ll be fine”.

We were indeed fine to cool off in the refreshing water after a long drive, the last 40km of our three-hour trip, was along a bumpy dusty desert road and the kids were agitated. The swim would have been much more rejuvenating had I not been told that morning at Yellow Water Billabong that there are over 100,000 crocodiles living in the wild and the idyllic Northern Territory conditions sees the numbers increasing.

Safety in numbers, I inch towards the small group of friendly Territorians whom I was gladly sharing the pool with, interestingly none were swimming in the mysterious deep dark open water. When asked about crocodiles, they reassured that other than harmless freshwater crocodiles over by the trickling waterfall, there shouldn’t be any saltwater crocs.

My son points up to the top of the falls, making out a few little people on the precipice 85 metres up. “There’s no crocs up there!”, one of the locals laughed “Not unless they can climb”.

We weren’t intending to make the 1km steep trek to the top of Gunlom Falls advised the trail was tough with little kids. But after seeing a young mum in bathers and thongs descend sure footedly with baby on her hip and the welcoming thought of absolute crocodile free waters at the top of the falls, we were quickly on our way.

Ascending Gunlom Falls is a little tricky in the heat, rather than the 20 minute walk up, it took us a solid 40 minutes as the youngest was carried in dads arms and my cautious four-year old slowly clambered over rocks and boulders.

We were instantly rewarded from the climb with a magical view of a natural infinity pool overlooking the endless plains of Kakadu National Park. To think we could have missed this unmissable place.

We spent the rest of the day idling under the shade of gum trees, hopping from one rock pool to another, padding under waterfalls and floating in the tranquil water on the edge of Kakadu without another thought of crocodiles.

Together we Roam’s Rene Young has travelled to 70 countries. When the Brisbane-based blogger is not discovering Brisbane’s street art, exploring Queensland or roaming the world with her five-year-old son and three-year-old daughter, she can be found indulging her love of reality TV. 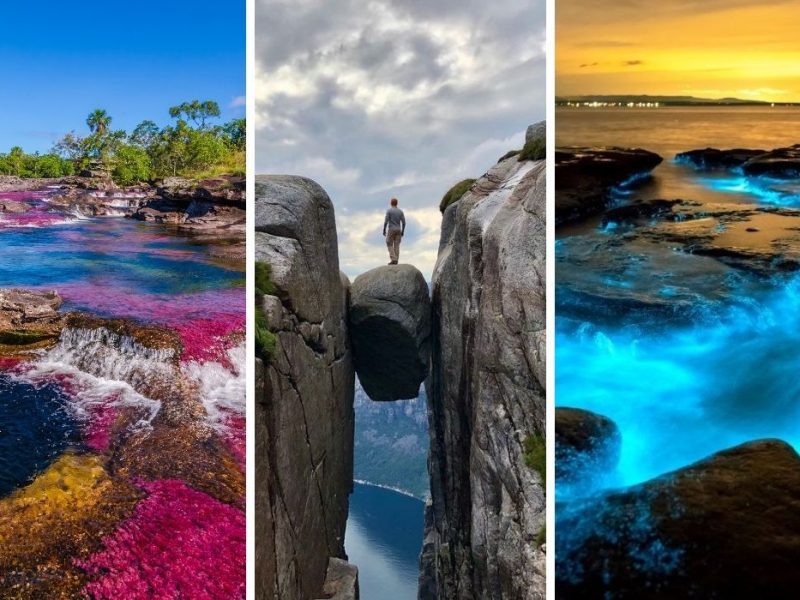 21 mind-boggling natural phenomena around the world

From rainbow river to a blue fire volcano we've rounded up the most insane natural phenomena in...

The first thing we notice when we arrive in the Isle of Pines is the water. It’s blue. A...