16 things to do on K’Gari (Fraser Island) with kids

16 things to do on K’Gari (Fraser Island) with kids

The world’s largest sand island, World Heritage-listed, K’Gari (Fraser Island), is ideal for all ages. Here are the best things to do with kids on K’Gari.

Whether you enjoy the silence of the forest or the whispering of the waves, the island should be included on any family camping wishlist at least once.

Nestled off the coast of Hervey Bay, around 300 kilometres north of Brisbane, Fraser Island is one of the few places on Earth where rainforest grows on sand. It’s one huge sand pit to explore. Stretching for 123 kilometres, Fraser offers fantastic fun along the beach, while inland you can walk along creeks or to huge rainforest timbers for some serious tree hugging. There’s fishing for the new or experienced fisherpeople in your camp, along with tranquil lakes to discover. Here are our top things to do with the brood on Fraser Island:

The boardwalk from Central Station follows Wanggoolba Creek. In the creek you can see the largest fern fronds in the world and minute fungi. Continue to Pile Valley, a four-kilometre circuit, where there are some of the largest trees saved from the saw by Fraser’s early loggers. The area was once home a bustling logging community.

Gushing up to four million litres of clear, freshwater into the ocean every hour, Eli Creek is the largest creek on Fraser’s eastern beach. There is a boardwalk that follows the creek but, for some real fun, you can float down the fast-flowing freshwater of Eli Creek on a boogie board or tyre.

3. Inspect the rusting hull of the SS Maheno

Many a ship has been wrecked along Fraser’s rugged coast. In fact, the island previous name Frazer Island was named after shipwreck survivor Eliza Fraser.

Today, the only shipwreck you will see is the S.S. Maheno, which came to rest on 75 Mile Beach after a cyclone in 1935. A note of warning – it is rusting and decaying so do not allow children to crawl over or through it.

The SS Maheno is a former passenger ship that was commissioned as a hospital ship during World War I and sent to aid the mounting casualties at Gallipoli. Named for the Maori word for ‘island’, Maheno would end her days on one, when a savage cyclone washed her ashore on K’gari, where she still remains some 80 years later.

4. Take in the view from Indian Heads

A sure thing to wear out little campers with lots of energy is the short, steep walk to Indian Heads. The reward is magnificent views along the beach and out to sea where there are often dolphins, turtles and whales frolicking.

5. Enjoy a dip at Champagne Pools

The Champagne Pools – a series of bluer-than-blue tidal pools – are the one spot saltwater swimming gets the thumbs up.

The trick with keeping Fraser enjoyable for younger ones in your camp is to plan your stops wisely, with one sure-fire winner being a swim at Champagne Pools. A set of steps leads down from the car park to the beautiful, naturally formed pools and the best time to visit is at low tide. Make sure you wear footwear as the boardwalk can become very hot. 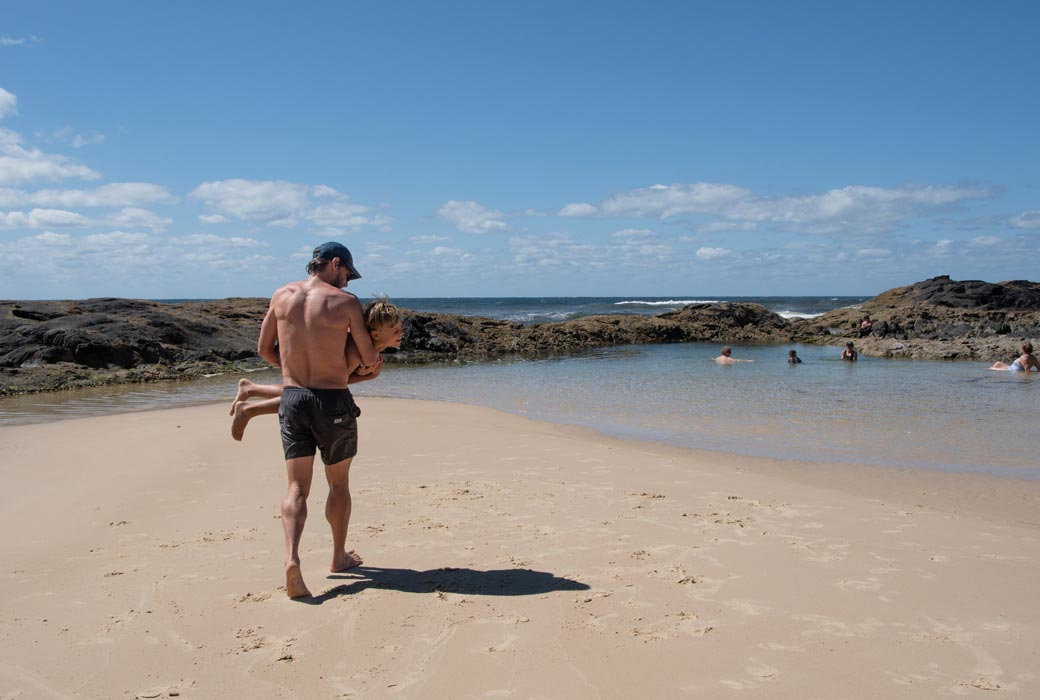 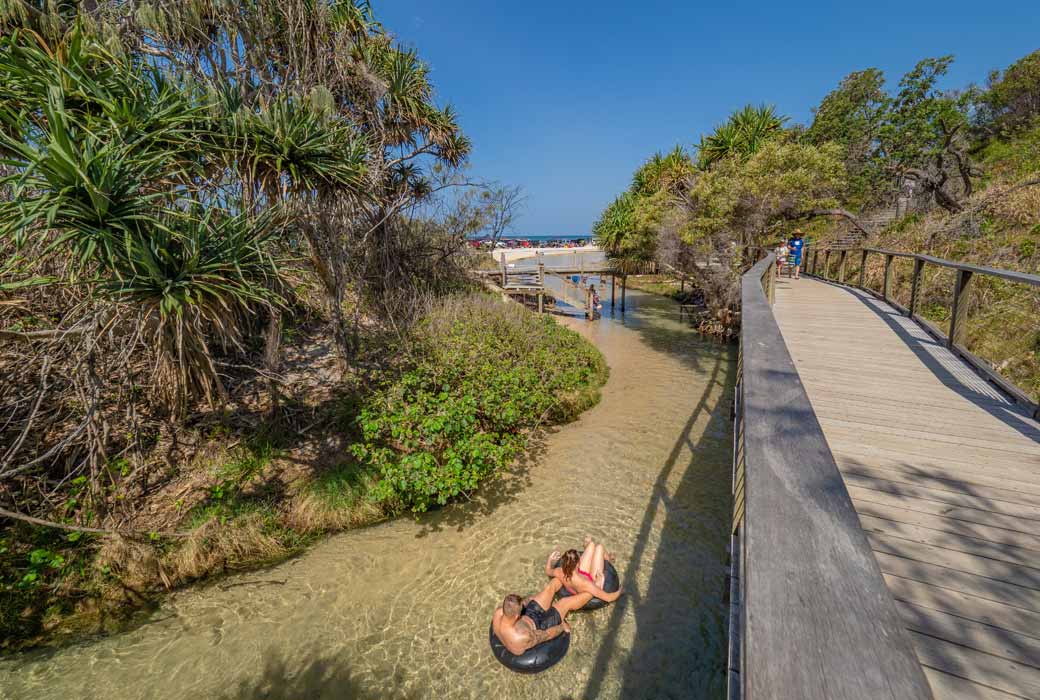 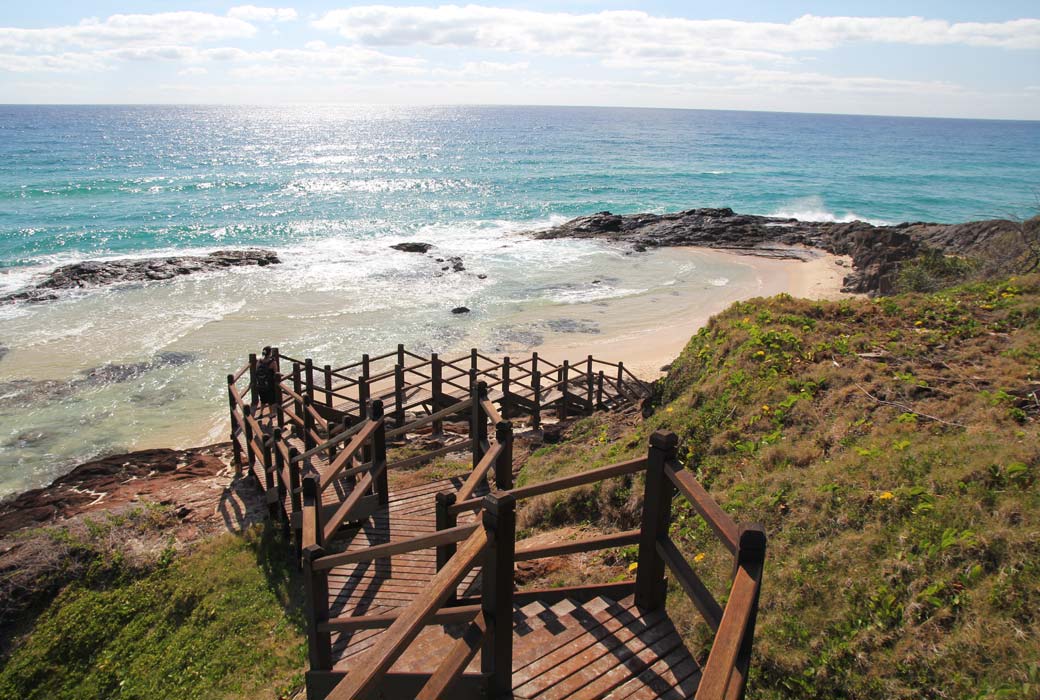 Boorangoora (Lake McKenzie) cannot be missed. Dig your toes into the soft silica sand and dive into the swirls of turquoise water.

It’s one of the many lakes on Fraser sitting 100 metres above sea level. There is a carpark, hikers’ camp and toilets. From the main entry area, follow the lake around to the left for a five-minute walk to a beach you may have all to yourselves. Look for the small fiery red carnivorous sundew plants along the way.

From July to November, the giants of the sea, humpback whales, swim by Fraser on their epic migratory journey from Antarctica. Platypus Bay, on Fraser’s western coast, is a renowned resting ground for mothers and their calves as they return south and is considered one of the prime viewing areas in Australia. Tours can be booked through Kingfisher Bay Resort. You can even swim with these giants of the deep – it’s a real-life science lesson.

The massive beach is great for fishing, picnics and 4WDing. The Maheno shipwreck, Champagne Pools and Indian Head can all be found along this stretch of sand.

Grab a boogie board to surf or slide down Fraser Island’s bone-white sand dunes. You have plenty of locations to choose from. Fraser is, after all, one big sandpit and that means there is a tonne of fun to be had for little (and big) kids.

Not many know that Kingfisher Bay Resort welcomes non-staying guests of all ages for its range of activities and restaurants.

Anyone can join the ranger walks, hire a paddleboard or canoe, and visit the Sand Bar, where you can eat awesome pizzas in between rounds of pool. Kids can learn about the environment in the Junior Eco Rangers program. The resort has a store, car-wash facilities, fuel and a gallery, making it a perfect day break.

You can’t go to a coastal playground like Fraser Island without indulging in an ice-cream or two. We all love a sugary holiday treat and the best place to take the kids is into the villages of Happy Valley and Eurong. While you are there, you may as well pick some extra camping supplies, such as sun cream and insect repellent.

Fraser Islands provides an expanse of family-friendly activities, from fishing and stand-up paddleboarding to beach games, sailing and kayaking.

If you’re short on time or big on detail, book a guided island tour with Fraser Explorer Tours. Photography enthusiasts should ask for Pete, a renowned photographer who will not only enlighten you with his enormous island knowledge, but also share tips on snaring the best snaps.

Tackling 75 Mile Beach is a must. An officially designated national highway, it doubles as a runway. Taking off and landing on a beach on a scenic flight with Air Fraser Island is thrilling, as are the bird’s-eye views. If you’re not a small plane person, zooming along it in a 4WD with the waves lapping at our tyres proves just as fun.

The UNESCO World Heritage-protected Pile Valley is the only place in the world where rainforests grow from sand.

The valley sites at 200 metres above sea level. The forest is so utterly enchanting with clear water creeks, giant king ferns and fabulous fungi.

You may half expect a unicorn to prance out from between the towering 50-metre tall satinay trees that grow from the sand. The fairytale island is, after all, frequented by princes… of the British variety.

The lunar landscape has been crafted by a stream crating small sand formations and exposing the underlying sandstone rock.

Kids will love jumping into the water while on a yacht charter. With Fraser Island Boat Charters you can hire a yacht and explore the waters of Hervey Bay and K’gari (Fraser Island) in comfort.

There are 45 camping areas on Fraser Island and the best for families are the ones with dingo-deterrent fences.

Central Station is set in the rainforest and has a 9pm curfew.

Dundubara camping area is also top spot.; it’s set behind dunes in a coastal forest and also has a curfew.

Lake Boomanjin and Waddy Point are another two to look at, with grass and sand sites, and large open areas for the kids to play.

This article appeared in Caravan & Camping with Kids magazine. To subscribe to the latest issue, click here. 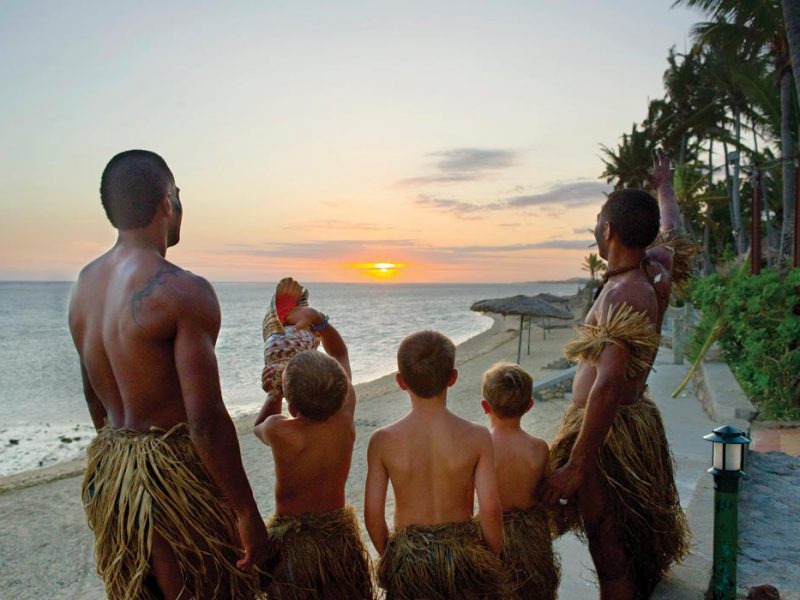 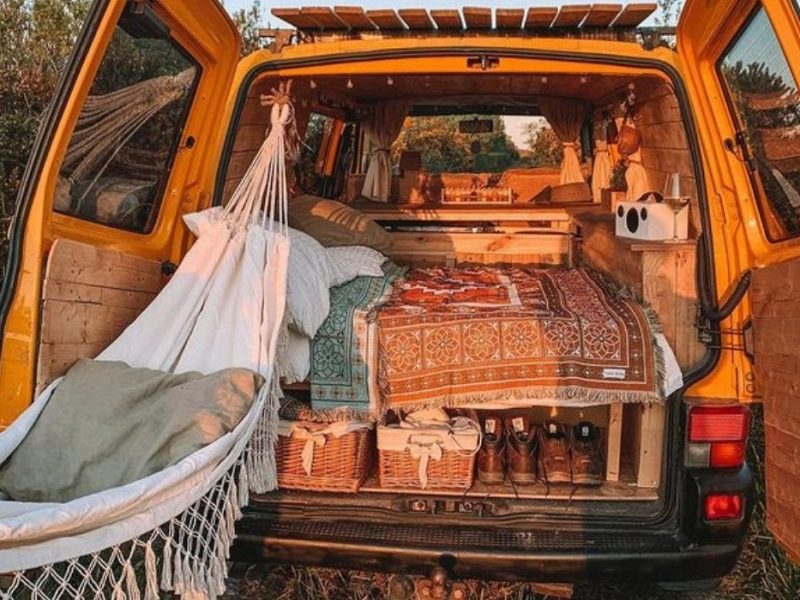 Students renovate campervan for under $800…and it actually looks good

Find out how these students managed to complete a full DIY van conversion for less than the...