HomeDestinations Australia How to spend a long weekend in Dubbo
Australia

Lauren Mcgroder discovers that there is a whole new world to be explored on the plains of Dubbo beyond the zoo, so why not come for a long weekend?

Lauren Mcgroder discovers that there is a whole new world to be explored on the plains of Dubbo beyond the zoo, so why not come for a long weekend?

There’s a lot to love about Dubbo, a rural city in NSW renowned Australia-wide as being the home of the ever-popular Taronga Western Plains Zoo. The town’s star attraction lures many a family to the Central West, but it’s the wealth of activities beyond the zoo that encourages them to stay. There is an entire itinerary worth of things to do and see that are reason enough to extend your stay. From its rich Indigenous heritage, to its unwavering community spirit, the city of Dubbo delivers enriching family moments in spades.

Take me to Taronga

The Taronga Western Plains Zoo is undoubtedly deserving of its reputation as one of Australia’s best. Here, you can cycle, stroll or hire an electric cart to tour the six kilometres of circuit, spotting lemurs, gorillas and Tasmanian devils as you go. Book ahead to reserve your place on the boardwalk for the Giraffes in Focus encounter or go inside the meerkat enclosure to meet with the resident troop.

Big cat enthusiasts over the age of seven can even get up close with a Sumatran tiger on the and go behind the scenes with Wild Africa. For a special experience, opt for the Zoofari Lodge and Billabong Camp overnight stays, which include accommodation in a luxurious tent overlooking the giraffe-dotted savannah and unique open-style encounters.

Alternatively, stay in town at Discovery Parks – Dubbo, located so close to the zoo you can practically hear the lions roar. While the kids play in the heated pool and water park, adults can enjoy a break under the stars and amongst nature. Don’t forget to check out their array of holiday deals online.

The word Dubbo means ‘red ochre’, and apart from being a nod to the incredible scenery of this part of country NSW, its namesake is also a reflection of the Indigenous history that has shaped much of the city today. Take a peek inside the tunnel of time at the Western Plains Cultural Centre, where museums and galleries capture the stories of the Tubbagah people, and those that have since made the rural city their home.

Continue on the path of discovery via the Tracker Riley Cycleway along the Macquarie River, named after the first Aboriginal police tracker to reach the rank of sergeant and receive the King’s Medal.

Just north of Dubbo, the Terramungamine Reserve is first and foremost a preservation area of Aboriginal heritage, in addition to a public recreation area where families can camp alongside the Macquarie River. At the reserve, families can witness examples of grinding grooves used by the Tubbagah people to sharpen tools and weapons (around 150 can be seen on the outcrop of rock that extends for a hundred metres or so along the river).

Dubbo was first proclaimed a village in 1849, but by then, Old Dubbo Gaol (as we now call it) had already been in operation for two years. It continued to house convicted criminals for 119 years in its position on the main street. Today, the 19th- and 20th-century buildings remain an important legacy of Australian history, particularly with collections featuring objects like the hangman’s kit and gallows and the cells themselves on display.

You can experience Dubbo’s dark side in a number of ways, be it a self-guided tour of its gloomy cells, a guided tour (in which the littlies can choose to capture or assist a ‘runaway prisoner’) or a family-friendly Twilight Tour during the NSW school holidays (prepare yourselves, these can be especially spooky!). For a bird’s-eye view, climb the stairs to the watchtower to take in the goings-on below, just like a real-life prison guard.

Discover the ins and outs of attempted escapes by prisoners of the past on the Escapes Tour. Stories range from two prisoners once dared to burn through the roof of their cells and burrow through a cavity, only to be caught on the other side, to a fugitive who was chased down the main street by a gaoler in his pajamas! The kids will no doubt be enthralled with stories of times gone by and thanking the gods above that they are not sleeping here tonight.

Built at approximately the same time, but with a very different purpose in mind, the Dundullimal Homestead is also an important factor in Dubbo’s past. The National Trust property – head station of a 6500-hectare squatting run – transports you to early colonial life, just five minutes from the centre of Dubbo. Curious kids can experience life in the 19th century walking through the home and sandstone stable complex.

By now you’ll be enthusiastic to see what Dubbo can do in the outdoors department. Channel your inner tranquillity at the four distinct gardens of Dubbo Regional Botanic Garden. The Shoyoen is recognised as one of the most authentic Japanese gardens in Australia, featuring a miniature landscape of waterfalls, streams, a tea hut or chaoya and Japanese Koi, while the Oasis Valley promotes the conservation of dry rainforests that today are found scattered across the Kimberley, Top End, Cape York and down the east coast of Australia.

Only seven minutes from Dubbo, the next outdoor adventure awaits at Aladdin’s Cave Bottlehouse. Kids will adore this quirky yurt-like structure made from 3000 bottles. Some even have messages, photos and toys tucked inside, making inspecting it an exciting prospect for curious little ones. While you’re there, allow yourselves to get lost in the fairy gardens, housing famous fairytale characters from now White to Thumbelina.

Open since 2011, the Education Centre at the Royal Flying Doctor Service (RFDS) is an exceptional learning experience. Visitors can experience a behind-the-scenes look at the life-changing work this national icon does for patients in remote Australia. Watching the real-life medical footage of RDFS doctors, nurses and highlights is a special highlight.

The biggest advantage of Dubbo’s wide open spaces and countryside location? Seeing the constellations lit up like you’ve never seen them before with some otherworldly stargazing at Dubbo Observatory! Discover the secrets of the galaxy on a tour of the Milky Way and audio visual programme, try your hand at astronomy on a high-tech telescope or take a ride to infinity and beyond on the Space Shuttle. The observatory is just a 10-minute drive from Dubbo’s City Centre and a next door neighbour to the zoo.

The wonders of Wellington

Just a 50-minute drive from Dubbo is the quaint and picturesque town of Wellington. Known for being home to the last known pistol duel to be fought in Australia, the community is also host to the Wellington Caves Complex, the Osawano Japanese Garden, the fisherman’s paradise of Lake Burrendong and wineries and goldfields.

While the Wellington Caves & Holiday Complex was was first recorded in artwork by Augustus Earle in 1826, it was re-discovered in 1830 by a colonist, George Ranken, when he accidentally fell into one of the caverns and came across huge bone fossils. The unusual formations are now known as the first place in Australia where the bones of megafauna – giant marsupials and birds – were first found. Soon, it could also become the place where paleontologists identify how these extraordinary oversized creatures became extinct, with a new excavation project beginning in 2016. Discover the caves’ hidden secrets on a guided tour (which are sure to be more informative than ever!) to the Cathedral Cave, Gaden Cave, Bone Cave and the Phosphate Mine. Standing beneath crystal formations of stalagmites, stalactites and coral is otherworldly and sure to have little ones wide-eyed with awe. The caves’ biggest formation measures a huge 32 metres wide and 15 metres high! If you want to spend the night, sleeping options include semi self-contained accommodation and caravan and camping sites. 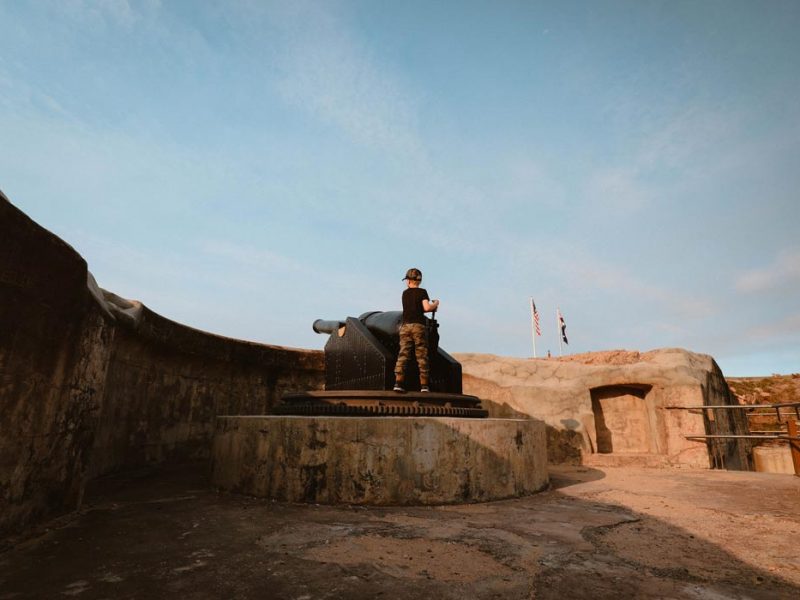 8 cool things to do in Townsville with kids

With over 320 days of sunshine, Townsville is the best place to get out and enjoy outback... 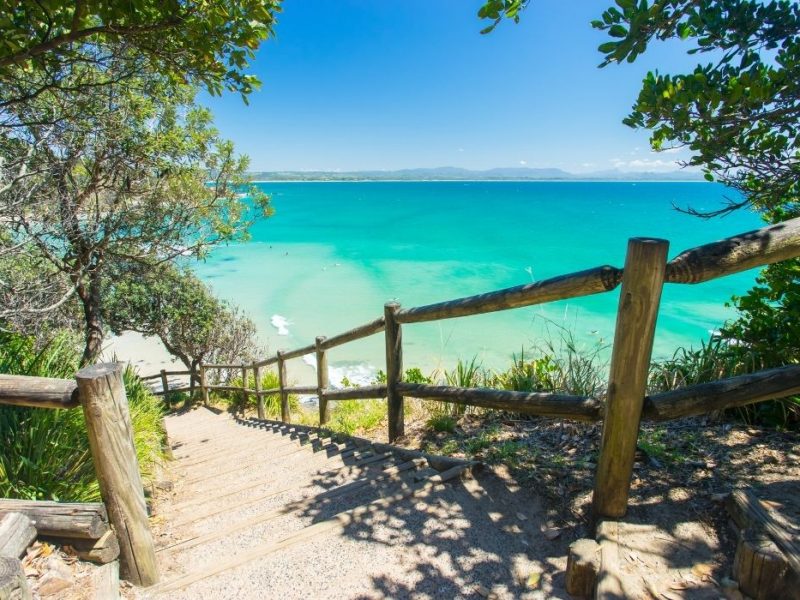 These road trip stops are so good, you might just give up on making it all the way to Bryon Bay....