With the quality of facilities now available in ski resorts, skiing with kids is easier (and funner) than ever.

There are many resorts with care available for babies and toddlers plus great kids’ clubs and ski lessons. Some of our favourite resorts in Australia and New Zealand for skiing with kids include:

Something for the whole family

Unlike other holidays where activities are divided squarely into those for the kids and those for the adults, skiing is one of the few sports you can do together as a family regardless of age. Natalee Ward has the rundown on ski resorts in Australia and New Zealand, while Marc Llewellyn takes a look at what Canada has to offer.

In recent years, mountain resorts in Australia, New Zealand and Canada have turned their focus to families. The result is an outbreak of quality ski schools, crèches for children and alternative snow activities for those who don’t ski. Package holidays offer deals where kids ski, and sometimes even stay and eat, free of charge.

The key to a successful, happy and safe family ski holiday is lessons. Ski schools (or “snowsport facilities” as many are now called) generally split children into groups of 3-5yrs and 6-14yrs. The lessons are a mix of child-minding and an introduction to the snow for young children, or snowboarding and advanced skills for older kids. While some children shun the idea of being in a structured environment, most enjoy the group activities and the chance to ski and have hot chocolates with children their own age.

The southern hemisphere ski season opens in June and usually runs until the end of the school holidays in October. But if you can’t get enough of family fun in the snow, then the Canadian season gets going in November and lasts through to Easter. Canada is a sensational family destination for a white Christmas.

Selwyn Snowfields: Australia’s favourite family winter playground, with so much more to do. You can choose from alpine, cross country skiing, two fun parks for snowriders, snowboarding, snowtubing on the adrenaline pumping tube park, snowbiking, snowshoeing and tobogganing on the only resort toboggan run left in NSW. Selwyn Snowfields are well known as family favourites with exceptionally low prices.

Perisher: Perisher has seven mountain peaks and includes the villages of Perisher Valley, Smiggin Holes, Guthega and Blue Cow Terminal. The resort has a half pipe and a mini pipe, seven terrain parks for freestyle skiing, 100km of cross country trails, night skiing and a snow tube park – tobogganing for the new millennium where kids and adults slide down the hill on inflatable tyres. The resort’s ski and snowboard school divides children into two groups, three to four years and five to 14 years.

Charlotte Pass: One of NSW’s smaller ski resorts, Charlotte Pass has a beginners’ area and children’s activities during the day and evening. The resort has a slope with a magic carpet, which is free for children under 4. Group lessons are available for children five years and older, there is a half or full day program for kids 3 years and over and younger children can take private lessons.

Thredbo: For families, Thredbo offers a great range of activities, including an indoor 50 metre heated pool with waterslide, perfect for when the weather turns inclement. Thredbo has the youngest snowboarding school, offering group lessons for children three to 17 years. Skiing lessons are available for three to 17 years while four to 17 years can ski or board. Thredboland is a kids’ only area with entertainment and a terrain park.

Skiing with kids in Victoria

Mt Buller: The closest of the big ski resorts to Melbourne, Mt Buller has a plethora of restaurants and pubs, as well as a cinema and alpine spa retreat and the state’s largest network of trails, with 22 lifts and three terrain parks. It is a great place to start for families, with excellent snowsports facilities for children three to six years (skiers only) and seven to 14 years (skiers and boarders). Mt Buller a good mix of terrain and extra activities for kids including a snow tube park and tobogganing.

Falls Creek: Given a perfect 10 rating for its child-friendly facilities, Falls Creek has an excellent Kids Snowsports school with numerous magic carpets in a separate terrain area. The resort has 450 hectares of skiable terrain and a good mix of beginner runs, 65 kilometres of cross country trails, snow bikes and night snow activities under lights. Wombat Ramble is the longest and easiest ski slope, which is great for kids but can become hectic as skiers of all levels make their way down this narrow trail. The snow tubing park is the best in the country, with a magic carpet ride back to the top.

Lake Mountain: This is a great resort for snow-play families. Lake Mountain is an easy 2 hour drive from Melbourne and has three toboggan runs, great snowman making areas, snowshoe tours, sled rides and Nordic walking. It also has 30km of groomed cross-country trails through 2400 hectares of alpine snow gum forest. The visitor centre includes a bistro, cafe, retail shop and rentals department. Gate entry costs $56 per car and use of the slopes is free.

Mt Hotham: Hotham has more intermediate and advanced skiing than other Victorian mountains, and kids’ facilities are plentiful. The Burton Riglet program introduces kids to snowboarding basics and balance with specially designed equipment. Children as young as three to 14 can take part in ski and board lessons. Other resort attractions include three terrain parks, free cross country skiing on 35 kilometres of trails, nights skiing and a childcare centre.

Skiing with kids in New Zealand

Cardrona: Arguably the best resort for kids in the country, Cardrona has a crèche for babies from three months to five years old. Ski areas are isolated just for children and the slopes offer great learning areas and challenges for the whole family. The resort even has a noodle bar on the top floor of the Snow Sports HQ which has the best view of the beginners’ area which means adults can enjoy a coffee and a bowl of noodles while watching their young ones learn to ski. Cardrona is in the south of the South Island, between Queenstown and the picturesque town of Wanaka, and is close to the ski resort Treble Cone.

The Remarkables: Another South Island resort, The Remarkables ski area is a 40 minute drive from Queenstown high in the Remarkables mountain range and has three north-facing sunny bowls offering sheltered trails, expansive terrain parks and backcountry chutes. The Kea Club offer all day children’s group ski and snowboard lessons for skiers aged five to 17 or for snowboarders aged seven to 17. Kids under five years ski free.

Coronet Peak: The closest resort to picturesque Queenstown, Coronet Peak has eight lifts, two terrain parks and the facilities at the modern base building promise a seamless experience. The Big Easy has plenty of space for beginners to learn in a safe environment, with intermediate and advanced runs centred around the Greengates Express and Coronet Express.

Treble Cone: The largest ski area in the South Island, Treble Cone has panoramic views over Lake Wanaka and the Southern Alps. For beginner skiers and snowboarders, Treble Cone’s learner area is located alongside the Base lodge and cafe with the convenience of a fully kitted ski and snowboard rental shop. There’s heaps for families who aren’t first-timers, too, likea massive 700m of vertical, the longest in the Queenstown Southern Lakes District and great off-piste terrain.

Mt Hutt: One for the North Island, Mt Hutt delivers stunning views and terrain for all levels, and lift passes are free for under-10s. There’s lots of kid-friendly accommodation, kids’ ski and snowboard lessons and childcare options for families. Skiwiland caters to kids from three months to five years with gear hire and lessons, while Kea Club looks after those aged five to 17.

Skiing with kids in Canada

Become a ski instructor …and ski the world!

Experts say that if you can turn your hobby into your work then life will be enjoyable, and... 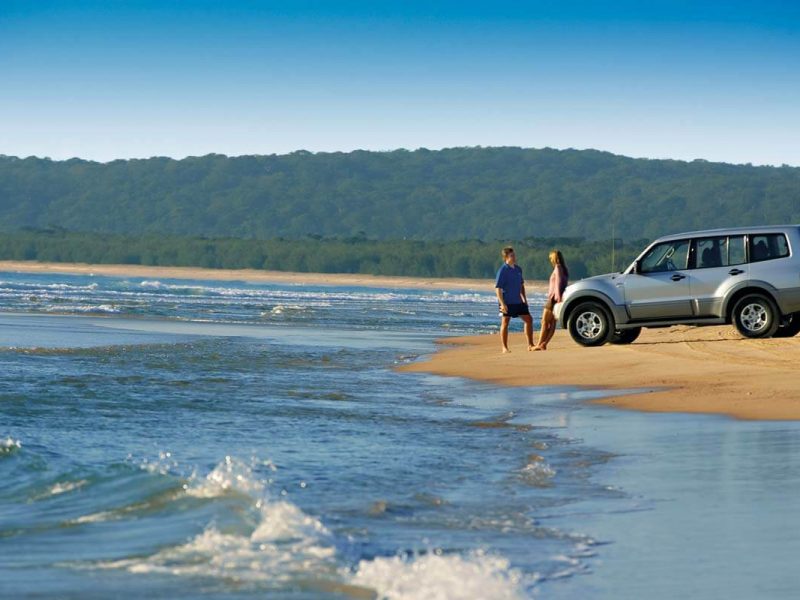 The best dune camping in Australia

Embrace sandy toes and salt spray at these awesome Aussie campsites smack bang on some of the...

With over 70 family-friendly locations around Australia, you’ll always have somewhere to stay on your next family holiday.
i

An oasis in the beautiful East Gippsland Lakes region of Victoria.
i
SEE ALL
Back To Top